With two days left before the 2022 PHF Awards Show, I’ll look at the available public stats for the last of the goaltenders who played in the Fed this year alongside the context of their seasons and analyze each player’s case for winning the Goaltender of the Year award.

Previously in this series I looked at the goaltenders for the Boston Pride, the Buffalo Beauts, the Connecticut Whale, the Metropolitan Riveters, and the Minnesota Whitecaps. Now it’s time to check out team number Six.

For their first full season as a professional hockey team, the Toronto Six went on a rampage, going 15-3-2 and missing out on the regular season title by a single game. Some people picked the Six to do well at the start of this season, but few could have foreseen the level of success they would achieve.

After Elaine Chuli's 4-1 run during the shortened 2021 NWHL season, it comes as no surprise that the UConn alum and former CWHL and PWHPA player was tapped to be the new franchise's starting goaltender this year. She set a high bar as far as franchise records go, finishing her first full PHF season with a 16-1 record and a streak of 16 consecutive wins. In the process she posted a .931 save percentage and a goals against average of 1.82, both of which were top-four marks in the league for goalies playing at least three games. She saved the third-most goals above average in the league and had the second-best record facing opposing teams’ power plays. Whatever metric you look at, Chuli was near the top of the list, and her candidacy case for Goaltender of the Year is a very strong one. 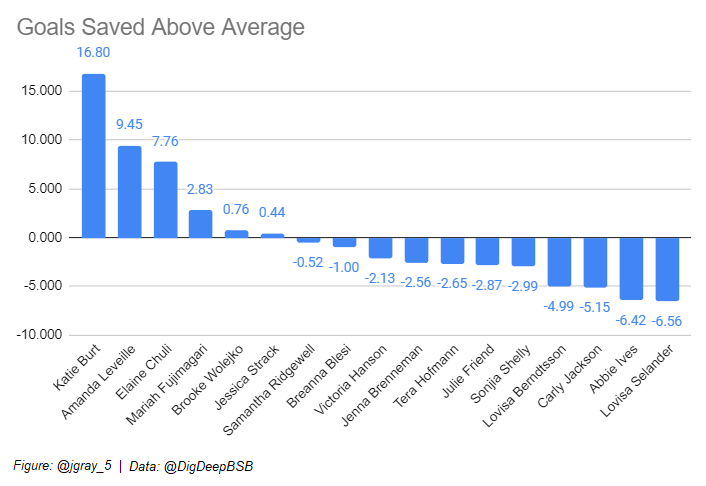 The Six were a great team this year. They scored the most goals in the league, had the biggest goal differential, took the fewest penalties, allowed their goaltenders to see the second-fewest shots. Their power play was the best in the league and their penalty kill was tied for best. The skaters were great. Their starter was also great.

Toronto hit the ground running this year. In their first 9 games, the skaters scored an average of 2.89 goals. Chuli played in 7 of those games and allowed only 8 goals, for an elite GAA of 1.14. When she could not travel to Boston for their first series against the Pride, the Six’s other goalies were credited with two losses against the reigning Isobel Cup champions: a shootout loss for Samantha Ridgewell and a 2-8 blowout credited to Tera Hofmann.

The Six’s next series versus Minnesota was postponed for Covid protocols on the Whitecaps’ side. They hosted the Beauts at home for two blowout wins. Then they were hit by Covid themselves, and went nearly a month without playing. The team was not noticeably affected on the scoreboard; after their bout with Covid, Toronto averaged 3.25 goals in their next eight games. The only aberrations were the two games in which they were shut out.

Evaluating the Six’s goalies this season is a study in how sample size affects results. The Six had two backup goaltenders this year. Samantha Ridgewell had a save percentage of .907 or higher in each of her four years at Merrimack College, as well as her year in the SDHL in Sweden. This year, she made 41 saves on 42 shots against the reigning Isobel Cup champions and walked away with a shootout loss. Her only other time in net for the Six came in relief of Tera Hofmann, when Ridgewell allowed five goals in 34 minutes. She did not play again in the next four games for the Six, and parted ways with the team to return to the SDHL.

After Ridgewell left, Tera Hoffmann was the sole backup for Chuli, and was given two starts for the rest of the season. In the first of those, she let in three goals in the first period and was pulled in favor of Chuli. The team surged back to score five goals in the second, and Hofmann was sent back to the net for the third period, where she allowed no more goals. Because Chuli was in net for the game-winner, she was credited with the win. In Hofmann’s next start, at the Buffalo Believes Classic outdoor game, she allowed one goal against the Buffalo Beauts, whose netminder, Carly Jackson, posted her only shutout of the season.

Ridgewell and Hofmann both posted career-worst stats this season in small sample sizes. Both have shown on other teams that they are capable of playing much better than this season’s results make it seem. Could they have produced better if they’d been given more opportunities? My guess is they probably could. But as it stands, neither will be in the running for Goaltender of the Year.

Toronto’s backups may have been able to make a more positive impact if they’d been given more time in net, but the coaching staff makes those decisions, and it’s hard to blame them for not wanting to change a system that was working well. Elaine Chuli was having a great season. It was only in a small sample size that she looked like anything but the best goalie in the league.

The final series of the season was at Connecticut’s Danbury Ice arena. The Six were at the top of the league, with the regular season championship and the top seed in the playoffs theirs to lose. In the first game of the weekend, Toronto scraped a win in overtime. Chuli allowed four goals, the most she’d given up in a single game all season. In the second game, the Whale shut out the Six and scored five goals, clinching the regular season title and the top seed in the playoffs.

Anyone and everyone can have a bad day, or a bad weekend. That series shouldn’t change anyone’s mind that Chuli is an elite goalie. But in a 20 game season, those nine goals were nearly a third of the 30 total that Chuli allowed all season. Those two games brought her save percentage down from .941 to .931, and her GAA from 1.45 to 1.82. She still finished with excellent numbers, but perhaps not quite as elite as she otherwise would have.

Alongside a goaltender’s actual performance, some voters for the Goaltender of the Year award may like to consider how valuable a goalie was for her team. The Toronto Six were a powerhouse this year. They scored three goals or more in twelve of their 20 games. Of the remainder, Chuli played in five and allowed her team to win four. The Six didn’t need for Chuli to be elite all the time, but she was anyway, and it made a difference in those games.

The final series of the year was the worst for Chuli, and it came at the worst time for the team: when they needed wins to clinch their playoff spot and the regular season title. That top seed in the playoffs would have had them eventually face Minnesota, rather than the Boston team that eliminated them and went on to win the Isobel Cup. We can’t know if it would have made a difference.

Despite facing a lighter workload than other goalies and less pressure to drag her team to wins, Elaine Chuli absolutely deserves to be a finalist for Goaltender of the Year. The question is whether she did enough to earn the title.