With the PHF Awards Show right around the corner, we’ll continue to examine the available public stats for each of the goaltenders who played in the Fed this year alongside the context of their seasons and analyze each player’s case for winning the Goaltender of the Year award.

Previously in this series I looked at the goaltenders for the Boston Pride, the Buffalo Beauts, the Connecticut Whale, and the Metropolitan Riveters. Today, let’s dive into the Whitecaps!

The 2019 Isobel Cup Champions and the 2020 and 2021 finalist Minnesota Whitecaps were one of the favorites coming into the 2022 season. Although they had lost a few valuable pieces in the off-season, Minnesota is not a state with a shortage of local talent, and they still had elite players in two-time Goalie of the Year Amanda Leveille, 2019 co-MVP Allie Thunstrom, and former Rookie of the Year Jonna Curtis.

The Whitecaps started the season in concerning fashion, going 1-3 against the reigning champion Boston Pride, then dropping two games against the Connecticut Whale. They had a series postponed due to inclement weather, then dropped two games against the Toronto Six, scoring only one goal on the weekend. In their first eight games, the Caps scored only 11 goals, for an average of 1.38. The team was then affected by Covid, and had their next series postponed. They took three easy wins against the Beauts, but then Leveille, who had started all 11 games for the team, had her season end at the start of February due to injury. In their final nine games, the Whitecaps would dress four different goalies and play three of them, winning only two games while scoring an average of 2.67 goals per game.

This was a rough season for a team used to being good and scoring a lot of goals. The team saw several veteran players land on IR for long portions of the season, including Leveille, Meghan Lorence, and captain Winny Brodt-Brown. While they were able to bring in some former Whitecaps and new players to cover the gaps, integrating players who hadn’t been with the team all season wasn’t easy, nor was making up for the talent not on the ice.

Losing Amanda Leveille was a big hit for the Minnesota squad. In her 11 starts, the winningest goalie in NWHL/PHF history produced four of the team’s six wins on the season. She posted a .937 save percentage, the second-best in the league, against the league’s heaviest average workload of 37.62 shots per game. She also had the second-best goals saved above average mark in the PHF and was top-five for average goals against in all situations among goalies to play at least three games. Leveille posted elite numbers as a workhorse goaltender on a team that allowed her to face the most shots of any goalie in the league. That alone should put her in serious contention for Goaltender of the Year, even limited to 11 games. 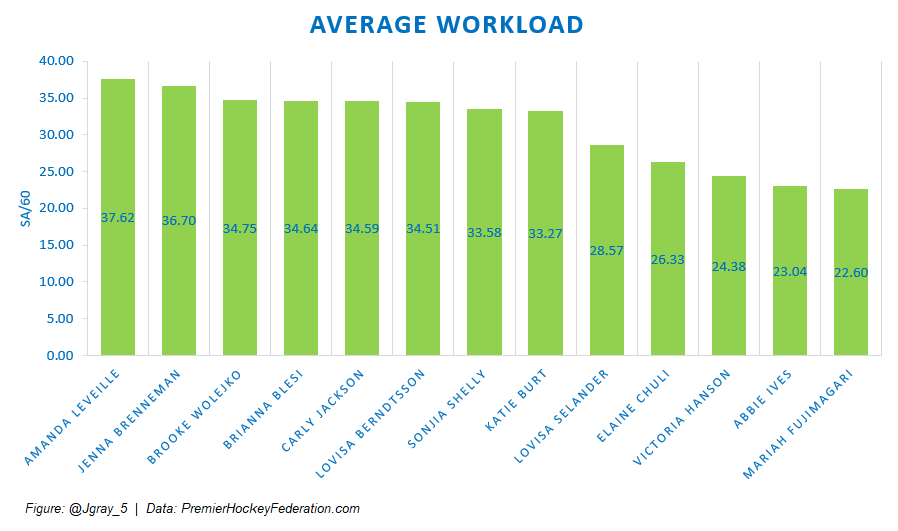 In terms of value to the team, an elite goalie can be very good on a team that doesn’t need her to be very good, or very good on a team that does need her to be very good. The Whitecaps were the latter this season. They averaged only 2.6 goals per game and did not win a single game this year when their goaltenders let in more than two goals. They managed to lose four games when two goals or fewer were allowed. With such low scoring, the Whitecaps needed their goalies to post elite stats to even keep them in games, and that’s what Leveille provided, allowing an average of 2.38 goals per game. In the context of her team, Leveille’s work doesn’t only qualify her for GotY, but should earn her consideration for Most Valuable Player as well, especially when we examine the team’s results without her.

When Leveille got hurt, Jenna Brenneman stepped in. Brenneman had two NCAA titles as a backup with Clarkson University, but most of her games played came in a single season with Penn State after transferring. Before stepping into the Whitecaps' net, the 2021 fourth round draft pick had played only two NCAA games since the 2019 season. Behind the Whitecaps, Brenneman faced an average of 37.6 shots per game, the second-heaviest average workload in the league behind Leveille. She had a .899 save percentage and averaged 3.69 goals against in her five starts, finishing with one win. Brenneman faced a lot of pressure in her rookie season, but was unable to produce the kinds of results that might earn her consideration for Goaltender of the Year.

To back up Brenneman, the Whitecaps called on their own former goaltender, Julie Friend. Friend had been a starter for St. Cloud State in Minnesota, played one season in Austria with the European Women's Hockey League, and had backed up Leveille during the 2018-2019 NWHL season. This year, she agreed to come back and dressed for three games, playing in one: a 4-7 loss to Metropolitan. She allowed six goals on 36 shots for a save percentage of .833.

Friend did not dress again after her loss. The Whitecaps brought in Breanna Blesi, who relieved Jenna Brenneman in a loss to Connecticut and then started the final three games of the regular season. Blesi did not play much as a backup at the University of Wisconsin from 2019-2021, but she did not fall apart facing 36.64 shots against per game. She picked up one win in her three starts, allowed an average of 3.32 goals and had a save percentage of .904.

The final netminder on the Whitecaps’ revolving carousel this year was a familiar face in Allie Morse. Morse played for Providence College and had backed up Leveille for the last two seasons before becoming the Whitecaps' equipment manager and sometimes practice goalie this year. She dressed for one game backing up Blesi, but did not play, and announced her for-real retirement at the end of the season.

This was a tough year in Minnesota, and for none more so than the goalies. The Whitecaps goalie squad faced the most shots in the PHF this year, 47 more than the second-place team and 115 more than the league average. The Whitecaps saw their workhorse starter fall to injury and two rookies struggle against a high volume of shots in their first professional games. With franchise goalie Amanda Leveille in net, they won four games out of 11. With anyone else in net, they won two games out of nine.

The Whitecaps did not have the kind of season they wanted, but without Leveille, they might have a historically bad season. Goaltending is not the only issue when a team struggles to win without one of the best goalies in the world. This was an odd season, filled with injuries and affected by Covid, but it highlighted some needs on a roster that saw only five players finish the season with more than nine points, and only five players finish with more than two goals. No defender scored more than two goals, and only two defenders had more than three points in the entire season.

Backstopping this team, Amanda Leveille did what she normally does and put up some of the best numbers in the league. She definitely earned her Goaltender of the Year nomination.