The 2022 PHF Awards Show has been announced for May 19 on Twitch. In this article, I’ll look at the Most Valuable Player Award candidates and examine how the selection process may affect their chances at winning the award.

In previous seasons, each NWHL/PHF Award has had four nominees who could be from any team. The 2021 MVP award saw three finalists from the Boston Pride, for example. In 2021, the finalists were chosen by 'a selection committee of media and broadcasters representing all six NWHL markets plus national contributors'. This season, each team submitted one candidate for each of the five major awards. This meant six finalists per award, and it meant some very deserving performances were overlooked.

The winner of the awards will be voted on by a ‘selection committee’ of market and national media members. This year, the awards candidates and the media voting have been announced extremely late. We are nearly two months past the end of the regular season and more than six weeks past the playoffs, which means it will be tougher than it should be for voters to ignore the playoffs when casting their votes.

On to the finalists!

This year’s MVP contenders include five forwards and one defender. Three of the nominees are the top point-scorer on their team; one is the top goal-scorer and another is tied for top goal-scorer. While scoring is absolutely not the only way a player can be valuable to their team, it is clearly a predominant consideration amongst whoever on the teams made these selections, so I would be remiss if I didn’t start off this section by discussing the nomination for the only team whose candidate did not lead any scoring category.

The final nominee is Shiann Darkangelo of the Toronto Six. Darkangelo is the team captain and top-line center. She had eight goals and 12 assists for 20 points in 20 games, earning a point on 30% of her team’s goals, and was a +16 on the season. She had the best face-off percentage on the team, winning 57.3% of her 379 draws. She is the first captain of the team, a face of the franchise, and she is undoubtedly a highly valuable player. However, the question fans will certainly be asking is whether she was the most valuable player on her own team, much less in the league.

Darkangelo’s linemante, Mikyla Grant-Mentis, was the top scorer on her team in goals, assists, and points. She went 13-17–30 in 19 games, earning a point on 45% of her team’s goals. League-wide, she came in second for points, assists, and points per game, and tied for second in goals. She scored 6 game-winning goals, the most in the league, won 50.9% of her 322 face-offs, and was a +25, the third-highest mark in the league and the highest on the Toronto Six. She was also excellent defensively and as a playmaker, lifting sticks, picking pockets, and making beautiful outlet passes that helped her team control the flow of the game. She won the MVP title last year alongside the Newcomer of the Year title. Her omission from MVP finalist consideration this season, a year where she led the league in scoring until the final game played, is notable.

One has to assume that the structure allowing only one nominee per team is the reason that Grant-Mentis is not a finalist for the MVP award, and in my opinion, this alone is a reason not to use this structure again. Simply put, if the system in use means that Grant-Mentis is not an MVP finalist after the season she’s had, the system in use is flawed. The fact that no goalies are being considered, in a year of historically good goaltending, is another sign that the system needs a redesign. However, that is the system we are using this year, so let’s see who else that system is giving us for candidates.

Taylor Wenczkowski, the nominee for the Boston Pride, went 8-7–15 in 20 games, which is the most goals and tied for most points on the Pride, and figured in on 31% of the team’s goals. She was a +6 on the season, tied for second-best on her team, and drew .452 in 166 faceoffs. Her offensive abilities were important in a year when the Pride struggled to find their usually dominant scoring. According to Head Coach Paul Mara, Wenczkowski’s emergence as an elite player has been something the coaching staff have seen coming and watched develop. She won the honor of playoffs MVP after scoring the Isobel Cup-winning goal in Tampa.

The PHF Awards are meant to be regular season awards. As the voting is coming this year more than two months after the end of the regular season, and more than six weeks after the playoffs, it will be more difficult than it should be not to let the events of the playoffs influence the votes. This is not a knock on Wenczkowski’s regular-season performance, but is definitely something that the Federation needs to be thinking about for future years.

The nominee for the Buffalo Beauts is Dominique Kremer. Kremer was 6-5–11 in 20 games, factoring in on 25% of her team’s goals. She tied for most goals on the team as a defender, including a game-tying goal that led to a Beauts OT win in the final weekend of play. She is also the Beauts’ nominee for Defender of the Year. Scoring was hard to find on the Beauts this year, but Kremer’s defensive play was also valuable to a team that struggled on both ends.

This is an interesting selection for the Beauts because Kremer was not the winner of the MVP award that was given amongst the team. Carly Jackson, the Beauts’ starting goalie, took that award. The Beauts’ internal award-winner for Rookie of the Year is also not their candidate for the league’s Newcomer of the Year award. It’s hard to tell whether the league awards have different criteria than the team awards did, or perhaps a different party made the nominations.

The Connecticut Whale’s MVP candidate is Kennedy Marchment. Playing in her first year for Connecticut, Marchment scored 13-20–33 in 20 games, pacing the league in points, assists, and points per game. She won the scoring title away from Toronto’s Mikyla Grant-Mentis at the last minute, notching five points in the last two games of the season. She was a +29 on the season, the highest mark in the Fed, won 51.4% of her 294 face-offs, and earned a point on 45% of her team’s goals. A high scorer in the SDHL, it was hoped her signing would propel the lagging Whale to new heights, and indeed she helped lead the team to a franchise-record 12-game winning streak. 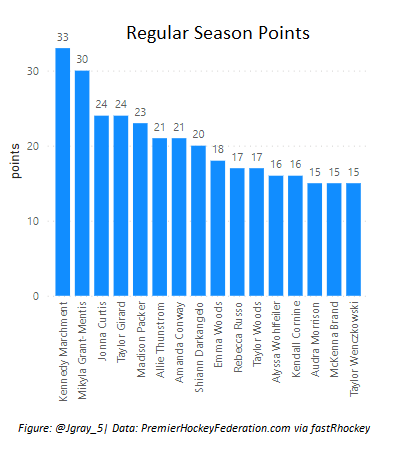 The Metropolitan Riveters’ candidate for MVP is their captain, Madison Packer. Packer scored 12-11–23 in 20 games and had the highest plus/minus on her team with a +13. She tied for third in the league for goals, was ninth in assists, and fifth overall for points. She earned a point on 42% of her team’s goals. She played heavy minutes on the top line, powerplay, and penalty kill, especially late in games when it sometimes felt like she spent more time on the ice than off. She was also twelfth in the league in penalty minutes, with 20 minutes in 20 games. She was deadly in the slot and behind the net and was undoubtedly a leader for a young roster struggling with a difficult schedule.

The MVP nominee for the Minnesota Whitecaps is Allie Thunstrom, who was a co-MVP award winner in 2019. Thunstrom scored 18-3–21 this season, factoring in on 40% of her team’s goals, and was a +13 on the season, tying for second-best on the team. Her league-best 18 goals in 20 games speaks for itself, especially in a season of historically good goaltending where the next-best scorers each potted 13 goals. In her fifth year with the Whitecaps and her second year wearing an A, Thunstrom’s scoring ability was immensely valuable for a Minnesota team that struggled to create offense. Several of her goals were on breakaways she created with her impressive speed.

The 2022 MVP candidates are all impressive players who brought a lot to their teams in several different spheres. It’s hard to compare the value of scoring versus leadership versus defensive prowess. Voters will have to decide whether it’s ‘more valuable’ to score on a team that scores a lot of points or a team that doesn’t. In the mix are the league’s top goal-scorer, the top point-scorer, and several players whose valuable contributions are seen beyond the scoresheet.

I find it very difficult to predict a winner here. I think it will come down to the makeup of the selection committee. Local and national media members will get votes, and which games those voters have watched will impact their appreciation for the contributions of a player like Kremer, whose scoring is not necessarily the most valuable thing she brings to the team, and players like Wenczkowski and Darkangelo, whose impressive performances may be overshadowed by teammates. If voters go just by the scoresheets, Thunstrom, Marchment, or Packer will likely win, and they would definitely be deserving. We’ll have to wait and see who takes the title on May 19.