In advance of the PHF Awards Show on May 19, this series is examining public stats for each of the goaltenders who played in the Fed this year alongside the context of their seasons to answer the question of who should win the coveted Goaltender of the Year award.

Previously in this series I looked at the goaltenders for the Boston Pride and the Buffalo Beauts. Today, we’ll dive into the Connecticut Whale.

The Whale were one of the big winners of the last offseason, re-signing their 2021 top scorer Alyssa Wohlfeiler and their briefly-retired captain Shannon Turner. They also signed the first overall pick of the 2021 draft, Taylor Girard, and 2017 Patty Kazmeier finalist Kennedy Marchment, fresh off a 72-point season in the SDHL. The Whale had the makings of a strong offensive team, and indeed, they scored the most goals per game in the PHF by the end of the season. The question was about pucks going the other way.

At the start of the season, it would be fair to say that the Connecticut Whale coaching staff had confidence that Abbie Ives would be their starter. She had strong stats coming out of Quinnipiac University, and performed well for the Whale in the shortened 2021 regular season. A blowout loss to Minnesota in the playoffs might have concerned some, but the Whale were confident in their goaltender.

The Whale’s backup in net, Mariah Fujimagari, did not have such a pedigree. Though she performed well in two seasons in the EWHL in Slovakia, she had only posted a single season of NCAA or North American pro hockey with a save percentage over .900. In the shortened 2021 season, she relieved Ives in the third period of a game against Toronto and allowed two goals on seven shots.

The Whale then turned on the jets and went on a franchise-record winning streak of 12 games, all won in regulation. Ives started nine of those, Fujimagari three. Ives posted a 1.67 GAA and .926 sv% over those games; Fujimagari allowed two goals in three games for .67 GAA and .970 sv% and a shutout.

By this point, the Whale had more than clinched their spot in the playoffs. Down to their final two games, they battled Toronto for the top seed. In those last two games, the Whale coaching staff started each of their goalies for one game of the back-to-back. Ives went first, losing a heartbreaker in overtime, 4-5. Fujimagari played the second day, posting her second straight shutout in Connecticut’s blowout 6-0 win.

Abbie Ives finished out the regular season with a save percentage of .894 and allowed an average of 2.44 goals per game across her 15 starts. Mariah Fujimagari finished with a .938 save percentage, allowed an average of 1.4 goals, and posted two shutouts in her five games. Both goaltenders benefitted from light workloads, as Connecticut’s tandem faced 161 fewer shots than the league average. 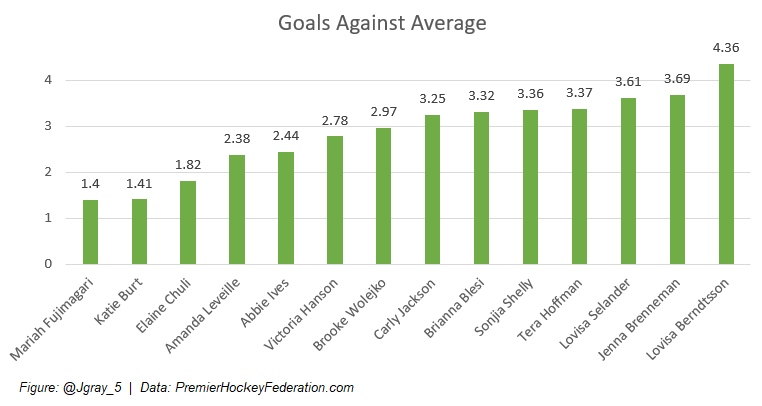 20 games is not a very long season. NCAA teams play over 30. You have to wonder whether Fujimagari might have won the starter’s position from Ives if the season had been longer, or if she’d have at least been given a few more starts. However, considering that Fujimagari had only played in five games, it’s perhaps not surprising that the Whale coaching staff chose to start Ives in both games of the playoffs. The skaters were more used to playing in front of her, and that can make a difference. Throughout the regular season, the Whale’s dominant offense was generally able to make up for their starter’s questionable metrics, and if it ain’t broke, don’t fix it. But in the Isobel Cup Final game, Connecticut scored two goals- only the fourth time all season that they scored less than three goals in a game- while Boston potted three plus an empty netter.

Would it have made a difference who was in net for that final game? We’ll never know. But Fujimagari’s regular season record might help her bargain for a pay raise this offseason.

The Goaltender of the Year award voters must take into account both the strength of a player’s performance and how much she helped her team. Abbie Ives had the second most wins of any goalie this season with 10. However, she was in the bottom half of the league in average goals allowed per game, Goals Saved Above Average and GSAA/60, which compare a goalie’s efforts to the league average, and was last in save percentage among goalies to play 400 minutes. It should be noted that Ives faced fewer shots than other goalies in the league, which can affect a goaltender’s sharpness on the shots she does see. As Ives was selected by her team as their candidate for Goaltender of the Year, voters will have to consider the defensive environment and workload when they judge Ives’ performance.

If the bar is lowered to goalies who played more than three games, Mariah Fujimagari was top three in the league for save percentage, GSAA/60, and shutouts, and had the lowest GAA in the league with only 1.4 goals allowed per game. The 15 points her wins produced for the Whale was tied for the third-highest in the league, behind only Ives and Elaine Chuli, who started 16 games for Toronto. She was also the only goalie to never lose a game this season, as her shutout in the season’s final game broke Chuli’s unbeaten streak. Those are definitely the kinds of metrics that argue for consideration for the GotY award.

However, Fujimagari’s five games played puts her below the 400 minute mark, which is the bar the PHF has been using to rank goaltender stats. Nine other goalies played more minutes than her. She faced only 113 shots in the whole season, and in her five games the skaters in front of her scored an average of 4.2 goals. Her team was not relying on her to keep goals against down in the way that some other teams in the league relied on their netminders.

For many ‘best of’ awards, voters consider both the play of the individual in question and the value they brought to their team. Every voter- every fan, as well- has a different formula for how much they weigh those considerations. And the value that a goalie can bring to the team is heavily influenced by the coaching staff, who choose which player they want to take the net, game after game. In Connecticut, the coaching staff chose to play Abbie Ives 15 times this season, and as the franchise-record winning streak shows, it worked out pretty well for them.

If I were to put together my own list of Goaltender of the Year candidates that was not comprised of one player from each team, Mariah Fujimagari would be on there. Even amongst this historically good season for goaltending, her stats are among the best in every category. She allowed more than a single goal only once this season. On the other hand, although usage is determined by coaching staff, and no goalie has control over how many goals their own team scores, it’s hard to argue that a player was the most valuable to her team when she played in only a quarter of her team’s games, and the skaters scored nine goals in her two shutouts.

Fujimagari is not a finalist for Goaltender of the Year. I hope to see her play more than five games next year, and after the performance she put up in season seven it would be a true disappointment not to see her get more chances in season eight. For this season’s award, Abbie Ives will face some stiff competition, and I don’t think this is her year. But voters will be taking into account things that these public stats do not. We’ll have to see what happens on May 19.