The end-of-year awards for the 2021-2022 season have been announced! Find information about the awards show and the nominees for the awards, including Goaltender of the Year, here.

This series will continue to analyze the goalies who competed this season and each of their cases for being a finalist or winner of the GotY award. Public stats utilized are provided by the PHF via fastRhockey, as well as the independent stats collected by Mike Murphy (@DigDeepBSB) at his 2022 PHF Counting Stats spreadsheet. Some data insights are backed up by analysis work from Giants in the Crease. Embedded graphs not otherwise attributed were made by me, so if you see a mistake, please let me know in the comments!

Previously in this series I looked at the goaltenders for the Boston Pride. Today, let’s look at the Buffalo Beauts!

When the puck dropped on the 2021-2022 PHF season, 2021 Rookie of the Year finalist and Goaltender of the Year finalist Carly Jackson was the presumed starter for the Buffalo Beauts. She had been the Beauts’ third overall pick in the 2020 draft and started all six of their games in the Covid-shortened 2021 season. That pattern held; Jackson started 16 of the Beauts’ 20 games this season, while SDHL Champion and 2021 first overall International Draft pick Lovisa Berndtsson started 4. The team’s third netminder, UMass Boston grad Caty Flagg, did not see any ice time and was dressed for only three games.

Jackson and Berndtsson did not have an easy job. The Beauts’ goaltending duo saw the second most shots of any goalie squad in the league, while the Beauts skaters blocked the fewest shots of any team in the league. Goalies are often judged by their win stats, and the Beauts won only six games this season, all of them with Jackson in net. However, wins are to a large extent a team stat, and the team that scores the fewest goals per game in the league will struggle to stockpile wins even with the best goaltending available.

At even strength, Carly Jackson did provide the Beauts with solid goaltending. She allowed only 30 EV goals, the third-fewest in the league among goalies who played at least 400 minutes. However, Jackson also had the worst record on power play goals against among all goalies who played more than one game, and the Beauts had 178 penalty minutes this season, the third-most in the league. Whether the blame is placed on Jackson being weak on the disadvantage, or the Beauts skaters failing to support her, a team that’s bad at killing penalties but good at taking them is not a great combination, and Jackson’s 15 power play goals allowed were a significant weight on all of her other stats. She also had the third-highest rate of shorthanded goals against in the league.

CJ was voted into the 2022 AllStar Game by the fans, and returned the favor with a highlight-reel goal while she was there. She was chosen by the team as their candidate for Goaltender of the Year. What kind of case does she have for winning the award?

The Beauts saw a massive amount of player turnover this season, with only two returning defenders and five returning forwards. The team was gelling a lot better towards the end of the season and making it hard for other teams to beat them: the second half of the season saw the Beauts collect five of their six wins, and increase their goals per game average from 1.9 to 2.5. As much as they improved in the finals ten games, it wasn’t enough to save Carly Jackson’s stat sheet.

Jackson faced 522 shots this season and saved 473 of them. The next-busiest goalie only saw 457 shots. Jackson’s workload was the heaviest in the league, and she may have received less support from the skaters in front of her than some goaltenders on other teams did. Better statistics on the difficulty of the shots she faced- were they taken from high-danger areas, how many were breakaways or odd-man rushes, how many were preceded by passes across the slot- would give us more insight on how difficult Jackson’s workload was beyond the counting stats that are currently public. 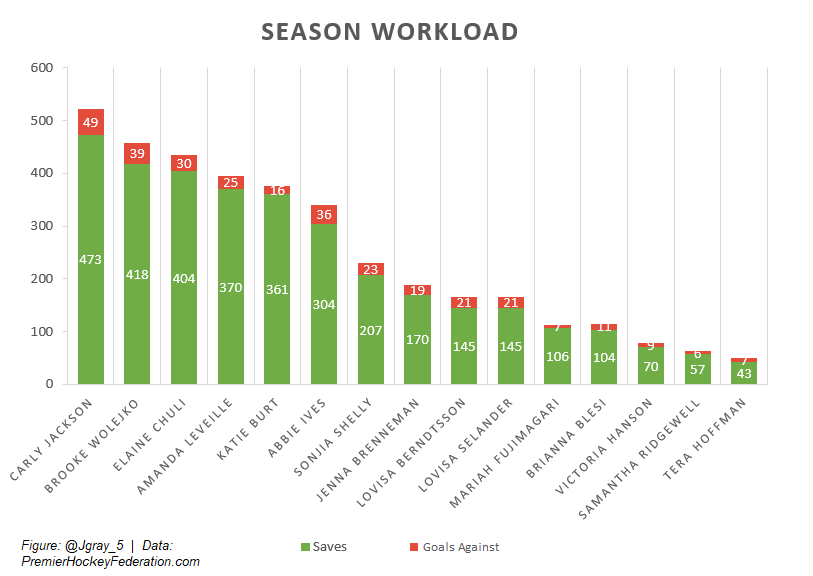 Another thing we don’t have in the women’s hockey stats space at the present is metrics for ‘steals.’ How many games a goalies ‘steals’ for her team is based on how many more goals she saved than she would be expected to, which is based on the difficulty of the shots she faces. What we can see, and use to contextualize the stats we have, is that in Jackson’s 16 games, four were wins by only one goal, four were losses by only one goal, and three were losses by one goal plus an empty net goal. The Beauts scored an average of 2.2 goals per game across the regular season, meaning they relied upon their goaltender to keep pucks out going the other way. With those close margins, even a few more lucky bounces or an additional finisher up front could have made a big difference for Buffalo- thus them finally picking up some points in the league standings when they started scoring even a few more goals per game. A few more saves from CJ also might have made that difference, but is it fair to expect a few more saves from a goalie who already made more saves than any other goalie saw shots?

Jackson’s performance kept her team in games and gave them the chance to win. It’s no surprise that she was voted Team MVP at the end of the season. If the Beauts had been able to capitalize in more of those close games, perhaps the GotY conversation looks a little different. However, most of Jackson’s metrics put her somewhere in the middle of the pack of PHF goalies this season, so that even if there had been more scoring in front of her, more tallies in the win column wouldn’t outweigh them. Additional metrics that may cast the quality of her play in a more impressive light aren’t currently available.

The media members who will cast their votes ahead of the awards show on May 19 will be able to use their understanding of the team context and their qualitative appreciation of Jackson’s efforts to inform their votes, but it would be a longshot to predict that Jackson will win the GotY award this season.