As we wait for the PHF to announce the award-winners for the 2021-2022 season, let’s take a deep dive into the contenders for the coveted Goaltender of the Year award. In this series, I’ll be looking at the public stats made available by the Fed and contextualizing the play of these goalies over the course of the season with their workload and usage.

There are limitations to the data available, so I’ll also reference stats collected and analyzed by independent analysts such as Mike Murphy (@DigDeepBSB) at his 2022 PHF Counting Stats spreadsheet, and Giants in the Crease. Stats from the PHF were collected via fastRhockey. Embedded graphs not otherwise attributed were made by me, so if you see a mistake, please let me know in the comments!

First up: the Boston Pride!

At the start of the 2021-2022 PHF season, Pride head coach Paul Mara was faced with one of the better problems you can have: he had three solid goaltenders on his roster. Victoria Hanson had posted great stats the previous two seasons as a backup. Lovisa Selander had won NWHL Goaltender of the Year in 2020 and was a finalist in 2021 as the Pride’s starter. And Katie Burt, coming back to the Pride after two years with the PWHPA, had been a finalist for the same award in 2019. Mara was cited as saying that he had no idea how he was going to manage the goalie rotation, but that he was loyal to his goalies and everyone would have to earn their starts.

The Pride started the season off strong, winning six of their first eight games by scoring an average of three goals per game. By that point, nearly midway through the schedule, Katie Burt had distinguished herself by her performance and was getting more than half of the starts in net, with a record of 4-1 and one shutout. Then in December, the Pride were hit hard by Covid and didn't play a game for nearly seven weeks. They averaged just over two goals per game for the rest of the season and won only four of their last 12 games. Burt was credited with three of those wins.

It would be hard to call Burt Boston’s ‘starter,’ as she played only 11 games out of 20, but she was definitely their best player at the position. In those 11 games, Burt produced seven wins and a league-best three shutouts. She posted a goals against average (GAA) of 1.41 and a league-best save percentage (sv%) of .958, alongside a league-best GSAA/60 (goals saved above average per 60) and league-best quality start percentage. 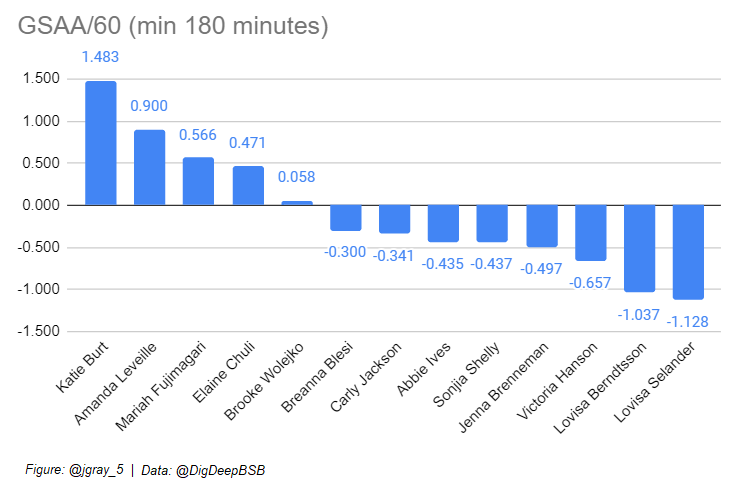 With the public stats available in women’s hockey currently, we aren’t able to determine how many games a goalie ‘steals’ for their team, a measure determined by a goalie’s performance against shot quality as well as quantity. But it must be noted that the Pride were unexpectedly low-scoring through the latter half of the regular season, and that of Burt’s seven wins, four were decided by one goal, and two were decided by one goal plus an empty net goal. Of her four losses, three were decided by a single goal, and one by a goal plus an empty net goal. Whether it was due to Covid, or just the variation of the season, the Pride did not overwhelm their opponents with scoring this year and Burt had to post league-leading stats in nearly every category to give her team a chance to win.

It begs the question of whether she ought to have played more games. Hockey logic says that when a goaltender is performing particularly well, the team should stick with the ‘hot hand’. The only other team with a ‘starter’ to play fewer than 13 games was Minnesota, whose Amanda Leveille played 11 games straight before sitting out the second half of the season with an injury.

Should Burt have been played more?

Workload is an important factor to consider, both for coaches and award voters. Perhaps the Pride coaches felt that having Burt play only one game on a weekend was the best way to keep from overworking her, while utilizing the other two goalies they trusted. But at the same time, those other two goalies did not produce impressive numbers.

In seven starts, Selander posted a career-worst 3.61 GAA and .873 save percentage. Victoria Hanson was not much better, ending with a GAA of 2.78 and a save percentage of .886 in roughly 3¼ games.

Just as some goalies play best when they are rested, some goalies produce better results when they are playing more games, or facing more shots. In addition to playing fewer games, Selander and Hanson saw fewer shots per game than Burt did. The reduced workload has definitely been posed as a possible factor in Selander’s unexpectedly bad season, and it’s something any award voters might consider. In light of the numbers, and especially the fact that Hanson and Selander combined for only three wins in nine starts, it’s fair to question whether the deployment strategy should have been adjusted.