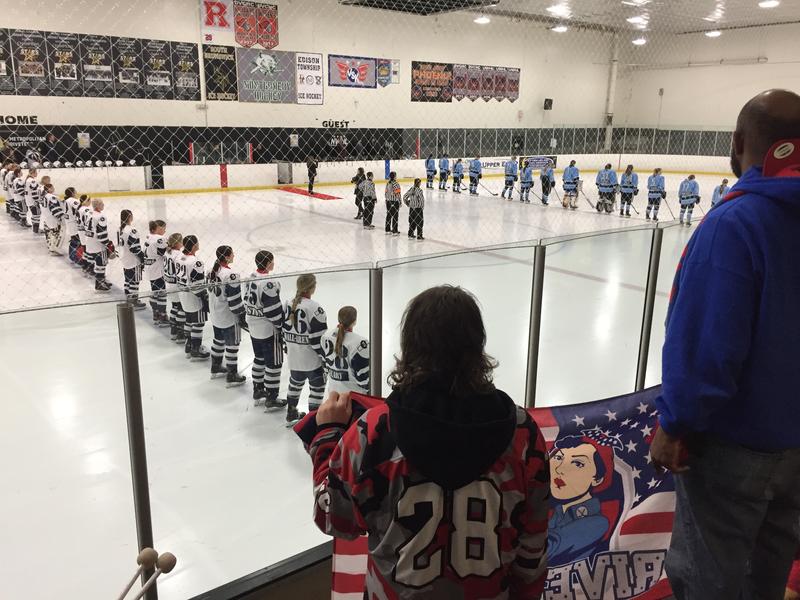 The regular season just flew by, didn't it? I swear October was just yesterday. Not gonna lie, I’m bummed out that there won't be more Riveters home games … unless absolute insanity happens in the post season. Which would include an impossible upset game against the Pride. Never say never, weirder things have technically happened, but I'm trying to be realistic. In the likely event that no miracle occurs, Coach Ivo did announce that the Rivs will play in a cancer charity game on March 27 at Chelsea Piers. Glad there's going to be at least one more chance to see the team before the offseason starts. And accessible by public transportation to boot! So everyone better be there or be square!

Anyway, back to last weekend. Saturday and Sunday were the final regular season home games for the Riveters. Overall, the weekend was a lot of fun, and there was a good vibe in the arena. We got to see rookies on both teams make their NWHL debuts, and they all adapted quickly to the game, displaying their talent on the ice. Even though the standings were set and the games technically didn't mean anything, there's always going to be a bit of fire when the Riveters face the Beauts, and these two teams did indeed deliver. I will admit, Saturday was a bit strange since both teams were rather tame. There were long stretches of time where neither team drew a penalty so props to them for having some control! Though … that discipline went out the window on Sunday. We got to see plenty of special teams on March 1st, and then the game ended with both teams shorthanded. Ah well.

Now onto some observations. Definitely a seesaw weekend, and it's a shame the Riveters ended the season with such a strange game on Sunday. Hopefully lessons are learned, and the Rivs will do better in the playoffs.

~ The Riveters took the foot off the gas in the second period on Saturday, which allowed the Beauts to tie it up. The Rivs need to be careful not to get comfortable in the middle of a game, other teams will take advantage of any opening they get. Especially in the postseason.

~ Sunday was not the Riveters best showing. I will admit, the first period was pretty evenly matched between the Rivs and Beauts. However, once we hit the second, it was all Beauts all the time. Leary managed to sneak a goal past Demers in the third, but any momentum the Riveters had was gone once the fight broke out in front of the Beauts net. After that, the wheels fell off, and the Rivs lost control of the game without enough time to recover.

~ The lines need to be kept stable. I know Coach likes to mix it up, but chemistry should take priority over experimentation. Especially this late in the season. Also, some more consideration should be taken when deciding which line goes out. To be honest, I'm not the best observer when it comes to line matchups, but in a one and done playoff game, the Rivs can't take any chances. One shift can decide the game winner.

~ Throughout the season, the Riveters defense can be pretty inconsistent. Unfortunately it comes down to who's available, because there are some outstanding defenders on the team. Sometimes the blue line is great, and sometimes they let the opposition sneak through, all depending on how many D the Rivs have dressed. Hopefully all hands are on deck for the playoffs. The one good thing about going to Minnesota is that Keys should be available and on the bench Sunday, which will really help solidify the blue line.

~ Shame the Rivs couldn't end the season above .500, a goal for next season!

~ Saturday was such a great game. We had all the lines working!! (One might even say they were rolling!) Even the defenders were even getting in on the action. It's been a long time since we've seen absolutely everyone rolling together. That's how you do it, Rivs!! Good to see it before entering the postseason.

~ Walther is finally healthy! You could tell she was back to form, fully mobile, and actually ready to play. Glad she was given time to get well, because now the Riveters are going into the postseason with their starter in true fighting form.

~ Welcome to the Riveters, Lewis! She was absolutely on fire Saturday. Hovering around the net all game, aggressive, and fit right in with the team. She ended up with 3 points in her very first game. Not a bad start!

~ Loved the pride and trans flags on the glass for Saturday's game! When I re-watched the game, they were featured prominently whenever play was in that corner. Wonderful to see!

~ The crowd was great this weekend. I can't thank the Cloud 9 drum enough for helping coordinate cheering. Also, there was booing from the crowd after the refs were discussing the penalties at the end of the third, which cracked me up. Glad the crowd is so invested in the game. Talk about a loyal, and dedicated fan base!! Can't wait to cheer with everyone in the stands next season.

~ Thank you, Coach Ivo for caring so much. You were a game changer for the Riveters, and helped a team recover their identity after terrible coaching in the fourth season. It's nice to have the ship righted.

The Riveters need to mentally erase the bad loss they took on Sunday before they travel to Minnesota. It's a shame they lost like the way they did before heading into the semi-final game, especially after playing such a good, high-energy game on Saturday. Hopefully the week off will help reset the team's mental game. Learn from the bad, remember the good, and the Riveters should be able play their best hockey in the semi-finals. There's no reason why the Rivs can't make it to the Isobel Cup Final. They just need to play their game the way we know they can, don't take penalties (seriously, don't take penalties against the team with the highest power play percentage. BEHAVE.), and try and to capitalize on powerplay opportunities if the 'Caps actually give the Rivs a player advantage. Also, fingers crossed there isn't bad weather on their trip out west!

Finally, I want to thank the Riveters for an amazing season. I still remember going to the LIU preseason game a little bummed out because of the bad taste season four left in my mouth, the tumultuous off season, and overall uncertainty throughout women's hockey. I left that preseason game pumped up and optimistic for what the rest of the season would bring, and the Riveters have delivered. I should have known that there would not be a repeat of last year. This year's Riveters brought back the joy and fun of watching my favorite women's hockey team. Thank you.