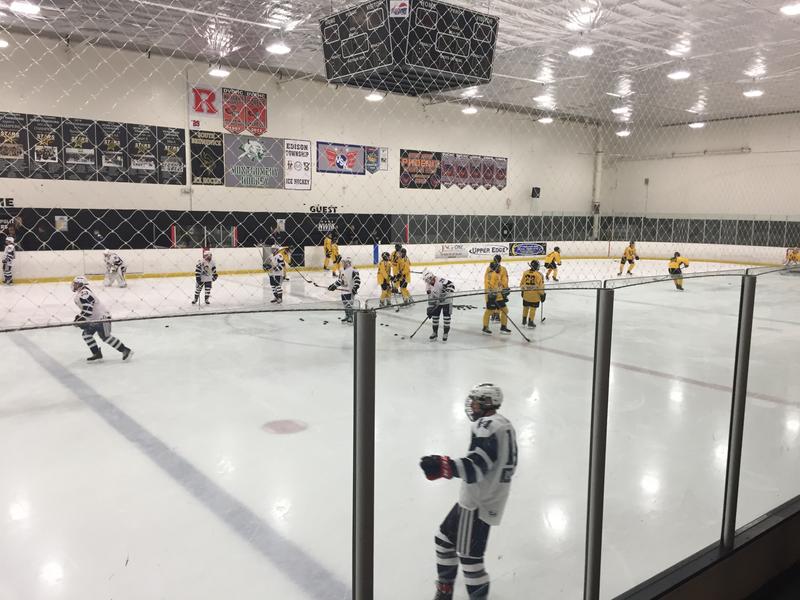 I think we can all thank the Whitecaps for solidifying the playoff seeding. By sweeping the Beauts, the 'Caps took the stress off the Riveters, saving them the trouble of actually beating the scary good Pride. To be honest, knowing that third place was already clinched wasn't a bad thing. The Riveters had a lot of key players out of the line up, and the on ice play reflected it (man, did we miss Leary out there). The Rivs didn't have the same energy we’re used to seeing, and there was a lack of their usual skill and pep in their play. The first period was especially lacking. It didn't help that Boston was on a different level this weekend. They wanted to end their regular season with a roar, and I'd say they accomplished that. I'd go as far as to say the Pride were already in playoff mode. That’s good news for Pride fans, because with this year’s schedule, the next game Boston plays will be their Semi Final Game against either the Whale or the Beauts. The Pride also have the longest break between games. Their regular season ended a week earlier than the rest of the league, which means they will be more rested. It's TBD if that extra rest will help or hurt. I'm sure there will be various arguments if a long break between games is good or not, but we'll see soon enough if it affects the Pride when they take on the winner of the play-in game. In any case, if beating the Pride in the regular season is hard, I can only imagine what they'll be like in the play offs.

Anyway, I know the Riveters tried to play strong this Sunday, especially since it was the last regular season match up against the Pride, but ultimately the Rivs fell well short. I think the combination of missing players, letting the first period get away from them, and the Pride just being 'on', derailed the Rivs plan for success. Ah well, at least Rivs Nation had an entire girl's hockey team to chant "Let's Go Riveters" in time with the drum.

~ I had a full hockey weekend, and made the trip up to Bridgeport for the Whale and Sound Tigers double header. While the experience was amazing, there was one down side. I ended up seeing Boston shut out two different teams, two days in a row. Pure torture!

~ The first two penalties the Riveters took in this game was all it took. Boston is not the team to go shorthanded against, and the Rivs paid for it. Game over before we’d even hit the halfway mark of the first period. The rest of the period was real rough, and Coach Ivo was absolutely bellowing at the team during their time out. Once intermission came, and the players left the ice, Ivo was marching into the locker room with a pinched look on his face. I can only imagine the earful the players got.

~ In the first, Boston was able to dance through all the defenders, and they got out of position. By doing so, they were also able to get DeMartino out of net where they easily scored, or they shot high on her, and took advantage of her smaller stature.

~ The Rivs keep trying to be too fancy. Also, there need to be more SOGs. It would help if the Rivs stopped stick handling every time they're in the offensive end. The number of turnovers because the Pride kept stripping the Rivs of the puck was outrageous, and totally preventable. Yes, it looks cool, but it also fails more often than not, and nothing kills momentum more than a turnover.

~ I don't really know what else to say other than it wasn't the Rivs day. The Riveters need their missing players to get better, and come back, so they can head into playoffs playing their best game. Hopefully we have a full, and healthy, roster ready to go in the post season.

~ I will admit that the Riveters were able to turn it around in the second and third. They tightened up the defense and they only gave up one goal in forty minutes. (Guess that intermission speech helped, Coach!) They also managed to keep the Pride's SOG below 50, which deserves a shout out, honestly.

~ Packer is one hell of a leader. I had a great view of the PK where she took a slap shot to the shin, which hobbled her, and then she proceeded to stay out for almost the entire kill. It was so impressive to watch. You’ve gotta give credit where credit is due, even when the game is lost, she gives 110%. I salute you, Captain.

~ Murphy was outstanding again. If anyone has a chance to see a game live, it's really a lot of fun watching her play. Super gritty, and smart defensive plays. I’m really pleased the Rivs were able to acquire her in the off-season. Also, Morse and Dosdall-Arena had some really nice defensive plays once the Rivs tightened things up in the 2nd and 3rd. It’s always fun to see the veterans step it up.

~ No matter how it happened, Rivs finished third overall! Not too shabby for a team who basically had to rebuild from scratch before the season started. While the faces may change, the spirit of the team has been maintained. They're a hard working, gritty team, and they can surprise you when you're not looking. I'm very excited to see the Rivs in the playoffs, but first we get to see them take on the Beauts again in the home finale.

Before the Riveters head to the playoffs, they still have two more home games to play in NJ. The Buffalo Beauts will be coming back to town, and I expect both teams will use these games to get comfortable with any new additions to the rosters, which means these games will probably be pretty competitive. I don't expect either team to accept their playoff berth and just play on cruise control. The Riveters especially need to give some ice time to the recently signed Frade and Lewis, so they can settle into the play style and speed of this team. Also, this will allow the Riveters to have a back up plan in case Leary is out longer than expected.

Anyway, since we are getting closer to the offseason I think this is the perfect time to throw out my thoughts about things the league should do to keep their fans engaged during the long dark summertime of no hockey!

First off, there needs to be offseason content for their Twitch channel. Yes, they can continue to have Open Ice for a few more weeks, but I think it would be fun to be a bit creative with the channel, and create new shows. Do things that will keep fans coming back for weekly streams. Also it would be a good way to keep subscription dollars rolling in year round. Do a weekly 'Throwback Thursday' where the channel airs NWHL games from past seasons with new commentary—maybe even player or coach commentary! Or once a month, rebroadcast one of the Isobel Cup Final games. Maybe have player highlight reels, and have players come in and discuss their play. Day With The Cup specials. If there are NWHL players who participate in summer sports, broadcast one of those games! Maybe you could get some retired players to do short little segments about what they’re doing now, or about their time in the league/playing hockey generally. Q and As! News updates on the league. When signings start coming in, have a show going through the hockey history of the signed players. This would be great to familiarize fans with returning and new players alike, and more importantly get everyone hyped for the new season.

Make it fun! Be creative! The possibilities are endless—the most important part is keeping eyeballs on the league during the summer.

Before we get too ahead of ourselves, season 5 still needs to be completed. Let's go into these remaining games healthy and ready to take on the post-season.