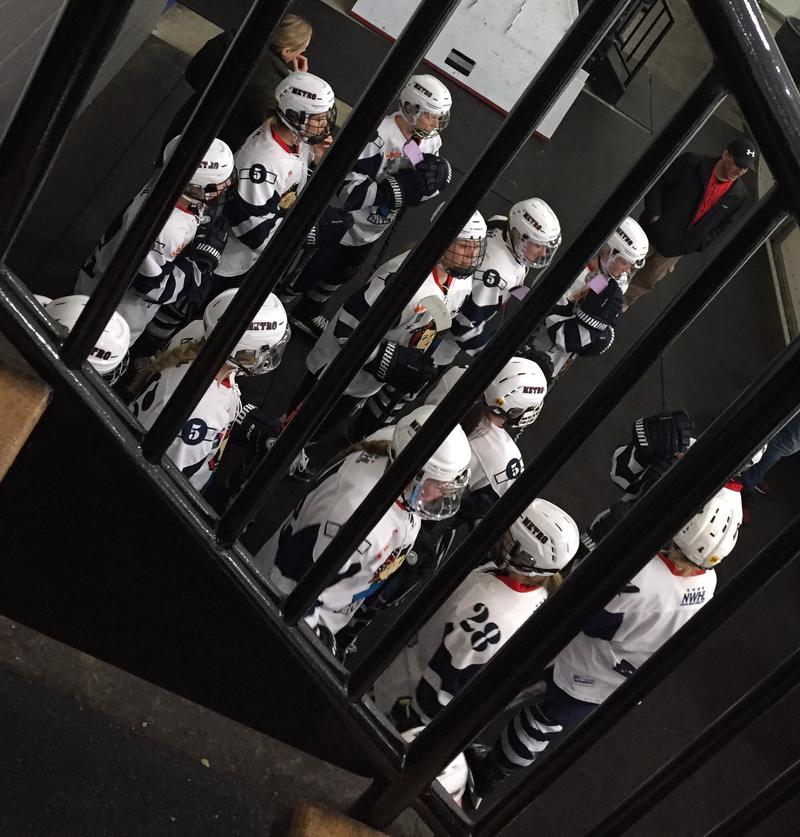 I'm going to start this Rants and Raves with my impressions of the 2020 All Star Game in Boston, since it was so much damn fun, and I want to gush about it!!

It was the first NWHL ASG I've been able to attend, and I had an absolute blast!! The atmosphere was convention-like, complete with merch, activities, and meet and greets. Probably one of the most relaxing NWHL events I've been to, since rivalries were set aside, and the chase for the cup was put on hold. We could properly celebrate the league's outstanding players, without reluctantly acknowledging their skills under our breath after they did something spectacular against our team. While I know there were technical difficulties with the stream (and that is something that absolutely needs to be corrected for all games, not just the ASG), the in-person experience was really, really fun. My favorite event was the Skate with the Players!! Fans and players were all on the ice together, having a relaxing skate and mingling when paths crossed. Really an excellent experience! I think if the league changes anything with the ASG, it should be to expand the events. Make it even more like a convention! Combine a fan fest and media day, complete with panels and activities to have a weekend packed with NWHL festivities.

I only have one gripe with the Boston ASG: Pride fans sure are quiet. The "Let's Go Riveters" chant we Rivs Fans did should have showered us with boos & immediately drowned out with counter chants. Absolutely no one stopped us. No one even tried! Shame Boston, shame!! *rings cowbell*

Now onto my most anticipated series of the year. Beauts vs Riveters!! And yes, it was worth the wait.

~ Overall, play was kinda sloppy. I attribute that to the rivalry—don't get me wrong, it was fun to watch. But in addition to the penalties that were called, there were a lot of sly and sneaky plays the refs didn't see, or chose not to call. In general, it was really penalty heavy, on both sides (with some stupid penalties taken, again on both sides). I appreciate the refs trying to keep a hold on things when it got serious, because these games could have easily gotten out of hand, especially with how nasty things got on Saturday. As it was, Sunday definitely felt like a continuation of Saturday, and I appreciate the refs calling a tighter game, especially after both teams were involved in mid-ice collisions.

~ I know I keep whining about it, but the power play is so, so, so bad. The Rivs can't buy a power play goal. And we had ample opportunities to get one against the Beauts this past weekend! So frustrating. Hopefully they’ll work on the PP, although at this point I don't know what they could even do to change it up. At least the Rivs did a better job keeping the puck in their offensive end during the power play. I guess that's progress.

~ Walther was definitely not ready to come back. On Saturday, we knew within minutes that the game wasn't going to be a goalie showcase. When it went to a shootout, we knew it was going to be a challenge for her going up against the shooters 1-on-1. Walther just wasn't physically able to get down to protect against the 5 hole goal. I know you don't want to bench your starter, but sometimes hard decisions have gotta be made. Especially since the Rivs are in a race with the Beauts to clinch 3rd place, and stay out of the play in game. Ah well, at least the Rivs got a point, and learned a lesson from Saturday. DeMartino was in net on Sunday, and Zisis signed a PTO to be our backup.

~ I feel like suspension rules have changed since last year. Seriously, what are the rules? Can we see them? Inquiring minds would like to know.

~ The Rivs defense really worked hard, even if it was to correct on-ice mistakes from careless play. Murphy was spectacular all weekend, making smart plays all over the ice (and getting a bit gritty!). Kilduff scored again! Also props to Johnston, she really worked hard during Saturday's game. Especially in that first period, she barely left the ice. At one point, she really needed to get back to the bench, but instead stayed out longer to protect the Rivs defensive end, and you could see her using every ounce of energy she had! Appreciate the effort!!

~ The Leary, Nash, and Packer line is so so sooooo good! (Well, until Packer got thrown out on Saturday.) Fortunately we had a redo on Sunday! I think Nash is my favorite center for Packer and Leary. I'd love to see this combo again. Also, Leary has some beautiful silky mitts. She really loves to do some stick handling and fake outs. Glad she finally got a goal while using her fancy skills—the whole building EXPLODED when she scored that beautiful goal. Though, she was robbed of a hatty!!

~ Packer is such a class act. After she got thrown out, she gave her stick to a young fan in the stands.

~ Cornine was fun to watch this weekend. She would constantly bring the puck into the offensive end by herself, and then we would actually have some other Riveters follow her so there were scoring chances. Nice work.

~ Congrats Rushton on your first NWHL goal! Ended up being the game winner on Sunday!!

~ I think it was at least 3 or 4 times that the puck hit the crossbar while DeMartino was in net. They were definitely her best friend on Sunday. She was also quite good, and extremely vocal yelling to her teammates. She’s such a mobile & animated goalie. Glad she got another win for her record, and it was so fun to see her skate up to join in the post-goal fistbump line!

~ The Rivs Nation cowbell made friends with the Cloud Nine drum! Loved the energy it brought to the building! I had a lot of fun joining in on the rhythms. Also, the players loved the drum. Before the start of the second period on Saturday, some of the Riveters stuck their sticks through the stands to tap on it. Glad they like it too! Also, a benefit is that the drum helps drown out the goal song played for a Riveters goal (Chelsea Dagger). The speakers aren’t good, but the Rivs should have their own unique goal song! I know some Rivs Fans have a few song ideas they’ve been dying to see used.

Honestly, this Beauts vs Riveters series couldn't have come at a better time. These two teams always like to throw wild cards when it comes to suspensions, and everyone trying to figure out what the NWHL rules actually are. More importantly, these games reminded everyone that there are still things the league needs to do to improve itself. Specifically, they need to be the ones making announcements about suspensions, roster changes, and rules. Either through an official e-mail to the press, or a posted statement on their Twitter. Fans shouldn't have to hustle to find out for ourselves when we see a new player on the ice and have no idea who she is. Or why a player is dressed or not--especially since the reception in ProSkate is crap and we can't get on the internet to check information once we're at the game!!

In all seriousness, I say these things because I am a passionate fan and I want the league to thrive. I'm not saying these things to be a hater. Last week it was pointed out that the streamed broadcasts need to be improved and consistent, and I agree! The streams are what bring in new fans all over the world.

This week I'm going to point out that the league needs to make changes in how they announce things. The NWHL needs to improve when it comes to official decisions. ALL statements and decisions need to be announced through official NWHL channels. It doesn't matter if someone already said it, and it was confirmed by the league, it still needs to be posted by the NWHL. That means not through the broadcasters, not through the media (who do a wonderful job getting answers), and especially not through fans at the game who see who's dressed or not during warm ups. Every announcement still needs to be posted by the NWHL, even if it seems repetitive.

Also, still waiting on that official league rulebook. Make sure when the rulebook is officially posted to include the different levels of punishment for misconducts, or DQs, or whatever they are! The NWHL website says "The 2019-2020 NWHL Rulebook will be added soon." Well, the 2019-2020 season is almost over: this isn’t good enough.

Anyway, I’m really looking forward to next week's games. I'll be at the Pride vs Whale game at Webster, and the Pride vs Rivs game on Sunday. It should be a good weekend of hockey as we hit the home stretch in the regular season!