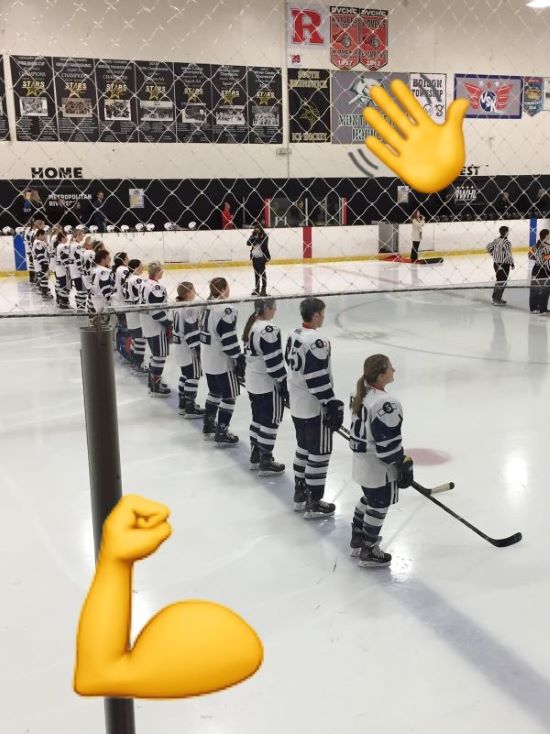 After a brief stay in the Metropolitan area, the Riveters were back on the road for their next four games. The first stop was a two game series in Minnesota where the Rivs faced off against the Whitecaps. Once again, the Riveters split the series with the 'Caps, getting an overtime win on Saturday, and a loss on Sunday. It's good to see the Rivs are able to keep up with the 'Caps, especially when they're playing in Minnesota. It’s never a bad thing to show you're extremely competitive against the reigning Isobel Cup Champions.

The second trip was to Buffalo, and it was a pretty special weekend! The Rivs played the Beauts in the first ever NWHL regular season outdoor game. If playing outside wasn't exciting enough, the Riveters announced Kelly Nash was returning to the team and would dress for the weekend. What a great get! She is one of the smartest players in the game, and you can't help but notice her making consistently good plays when she's on the ice. She has such amazing hockey sense, and I was so happy to see her on the team again.

But wait, there was more! Coach Ivo dropped a hint that Ashley 'Stretch' Johnston would be coming back. WHAT!? HOW!? WOW!! We got confirmation Stretch was officially back when the announcement went out that she signed a PTO and would dress for the Buffalo games. Damn, you just knew we were going to win after that! Not only did the Rivs sweep the Beauts in two very exciting games (what a third period in the outdoor game, am I right?), but we also found out Stretch signed a contract, and was staying for the rest of the season! After a successful road trip and some "new" recruits, the Rivs were coming home with some momentum.

This past weekend the Riveters and Whitecaps faced each other for the last time in the 19-20 regular season. Based on what we saw in earlier match ups, we were expecting to see some fast and exciting hockey, and those expectations were definitely met.

~ On Saturday the Whitecaps were able to shut down the Riveters dynamic forwards and prevented them from creating any space. When the Rivs did manage to break through, all shots they got were immediately taken care of by Leveille. The Rivs desperately needed to get Leveille out of position in order to capitalize on an open net, and while they had some chances, the ‘Caps defense was able to smother play when the Rivs got into the offensive end. It was frustrating.

~ Leary was cursed on Saturday. There’s no other explanation for what happened.

~ Shouting "Shutout" did not work.

~ They still need to work on the power play, but the good news is the Rivs have managed to improve, and are no longer last in the league!

~ I think it may be time to reconsider the bench door rule. ProSkate has awfully high boards, and several players were struggling to clear them during line changes (there were several comical moments when a player on the bench would haul a player over by her pants). I absolutely understand why the rule was created after what happened to Taylor Holze, but I think a compromise can be met, in the interests of avoiding a new injury.

~ I’m going to be honest, can’t really think of anything else that was rant worthy. Saturday was the only day in which there could have been improvements, and the Riveters still played a damn good game. The best part is that a lot of these problems were already corrected by Sunday.

~ First home win of the season!! It's been a long time since we saw one of those, and it couldn't have been sweeter.

~ Despite not being able to make practices, Stretch and Murphy made a great defensive pair! In fact, all of the Riveters defenders were stellar this weekend. What was a weakness in the beginning of the season has become a real asset with the addition of Keys and Johnston to the blue line. Not to mention, the Riveters played this weekend without Dosdall, which makes this even more impressive!! Great to see the team knew what they needed and got the pieces to solve the problem.

~ Leary FINALLY got her goal Sunday! Her celebration said it all.

~ Shout out to Murphy, she had one hell of a weekend. From a layout save to stop an empty net goal on Saturday, to the game winner on Sunday. She played hard every minute she was out on the ice!

~ The Rivs were fairly disciplined this weekend, but still played with grit. I think they found a nice balance. Of course anything can change once they play the next game, but they did pretty well staying out of the box against the 'Caps. Along with improved discipline, the Riveters had tons of small moments where they played extremely smart, tight hockey--be it a good pass, or taking the puck and successfully transitioning it out. It was really beautiful hockey to watch.

~ I enjoy Ivo coaching so loudly you heard him from across the ice. So fun, as a fan, to hear him so engaged & animated!

December was one giant gift giving month for Riveters fans. Not only did Nash and Johnston return to the team, but Shelly Picard was announced as the deputy commissioner of the league. Seeing all these familiar names again gives me hope, not only in the short term with this season, but for what is being built for the long term. It's exciting, and I'm hopeful as a fan to see the progress.

Now onto the Riveters. They have 9 games left to play in the season, with 8 of them to be played at home. While I'm sure there are important things like standings and plays to be concerned about, I'm more interested in how much fun I'm going to have. Last weekend I had a great time, and it started from the moment I got in the car and picked up my fellow Rivs fans so we could all watch our hockey team together. The Riveters are back, they're exciting to watch, and I think they may be legit contenders. Time will tell of course, but I can't wait to see them play again on Saturday!