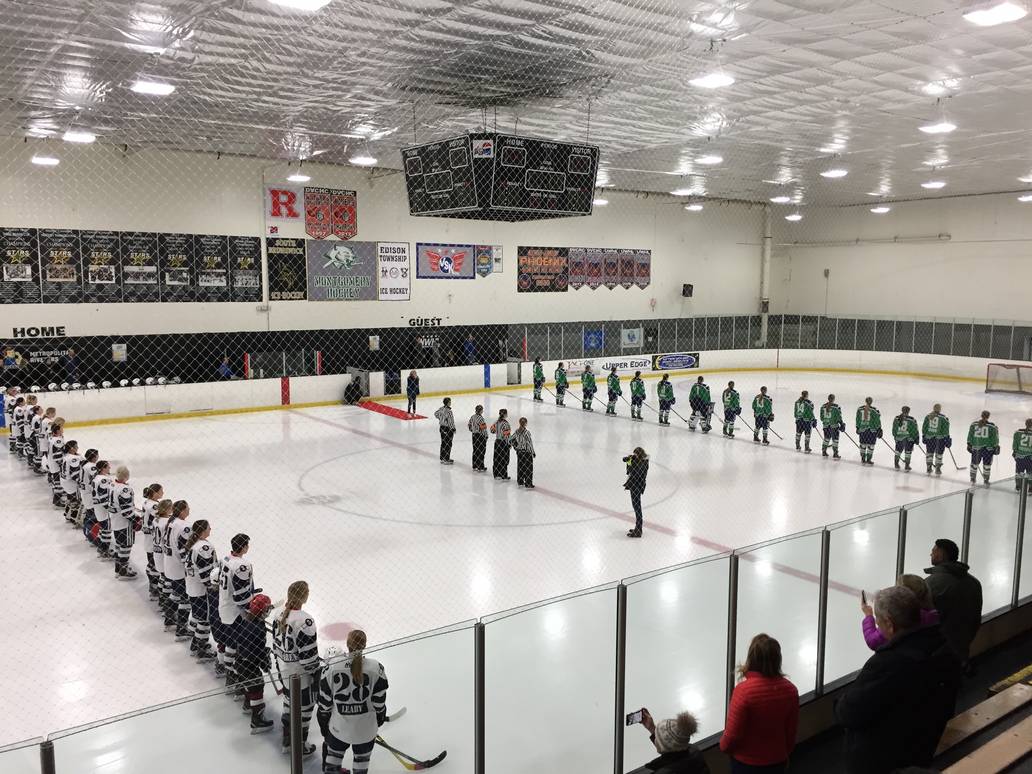 Whale Whale Whale, Connecticut sure likes playing at ProSkate. If this were baseball, the Whale won the three game series against the Riveters. Fortunately it's hockey, and overtime losses still count in the standings! The Riveters and Whale were both rewarded for their outstanding effort, and after all was said and done, both teams came away with 4 points. Not too shabby. Though it does sting a little bit that the Whale broke their losing streak in New Jersey playing the Riveters. Boo.

Anyway, as a whockey fan I was not disappointed in the least with the past three Riveters' home games. We were treated to some great hockey. The games were fast, chippy, and extremely entertaining. The Whale are certainly a team to keep an eye on in the home stretch. Especially since they've improved their roster with some much needed defense, and even more importantly, some offense. They definitely kept the Riveters on their toes, and kept our forwards contained. To see the Whale improve is great for the league, but not so great if you're a Rivs fan!

Now onto some observations from the games against the Whale.

~ The Riveters really got locked up by the Whale's defense for the majority of the games. Connecticut did a good job muffling the Rivs' chances by swarming them whenever they came into the Whale's end. Props to the Whale for signing all those PTOs to beef up their roster. It seems to have worked, because they looked like a totally different team, and ended up winning two out of the three games.

~ A running theme with the Riveters was, while they tended to get plenty of SOGs, most of the shots weren't high quality. The Rivs also spent too much time getting fancy trying to set something up. They need to work on getting better shots, or at least the type of shots that set up for a juicy rebound. Perhaps mixing up the lines a bit to find some chemistry would help? Worth a shot!

~ Wolejko was on fire. Sometimes there's not much that can be done when a goalie is in the groove. The Riveters had a hard time figuring her out at times.

~ The Riveters power play is just non-existent. Or maybe the Whale's penalty kill was abnormally good? Given the history, I'm going to blame the power play.

~ In the game where the Whale broke their losing streak, it was frustrating watching the Whale tie the game, and then the Riveters getting a major penalty called right before overtime. Come on! Give us a break, Stripes!

~ If Walther is out past the All Star break, the Rivs need to sign a goalie to a PTO, ASAP!

~ Hate to say it, but the Riveters only woke up once Walther was injured. The Whale were absolutely swarming, leading in SOGs, and controlling the play in the first ten minutes of Sunday's game. Gotta figure out a way to stop another team from controlling the play without your goalie getting hurt!

~ There was some outstanding goaltending in these games from everyone, but bravo to the Rivs tendies, Walther and DeMartino!! Walther unfortunately got two Ls on her record from these games, but she was outstanding every minute on the ice. She should not feel bad about either performance. Also, congrats to DeMartino on her first win! She did wonderfully coming in cold to a high intensity situation. Her previous appearances were in relief after Walther had to be pulled. It was great to see her in a competitive situation. Also, nice primary assist on Packer's goal!! It was mentioned this is the first primary assist by a goalie in league history. Nice!! Double history made, there.

~ Loved seeing all the former Riveters on the ice and in the stands. Ketchum, Aramburu, Weber, and Orlando. As they say, Once a Riveter, Always a Riveter!!

~ For the most part, the refs really let these two teams play. Lots of physicality, and a few really spicy moments. Super intense, not to mention extremely entertaining games!

~ While the power play ain't great, at least the penalty kill is pretty good!!

~ I will always laugh whenever I hear Ivo yelling about a call. Thank you for the passion, Coach! As a fan, you love to hear it!

~ KILDUFF! I had the pleasure of sitting with her family when Kilduff got her first NWHL goal. They were so happy, cheering and screaming! They even had the puck delivered to them in the stands. It was awesome to see. Congrats!!

~ I love watching Packer and Leary. They have so much chemistry and creativity together. When they're on the ice, they are very fast, dynamic, and manage to create some excellent offensive opportunities. (If you mix up the lines, leave them together!)

~ The 1/11 game was so tight--probably one of closest games I've seen all season. Both goalies were in the zone, and it was one of those games I wouldn't have minded ending in a tie. Everyone was outstanding. Though I guess watching NWHL history take place with an eight round shoot out is cool too ;)

~ Even though it took Walther getting injured to do it, the Rivs finally woke up once DeMartino was in net. Strange what causes a team to rally, but I'll take it.

Believe it or not, there are only three weeks left in the NWHL’s fifth regular season. Where has the time gone? October feels like yesterday! Fortunately there's still plenty of hockey to be played! The Rivs have five homes games left to wrap up the season, with four of those five against the Beauts!! These are must watch games. Will there be penalties? Probably. A suspension, or two? Maybe. Some intense, lively hockey? Oh yeah. In addition to the rivalry between these two teams, the Beauts and Rivs will be competing for 3rd place in the standings. Buckle your seat belts, because these two teams do NOT want to play in the wild card game. Get ready for some intense hockey!!

But before the Beauts come to town, we have the All Star Game in Boston! It should be a super fun and entertaining event. I can't wait to see the league come together to celebrate the players, and give us fans an opportunity to cheer on our favorites! I'm also looking forward to meeting other NWHL fans who I've talked to throughout the years. Should be good fun!