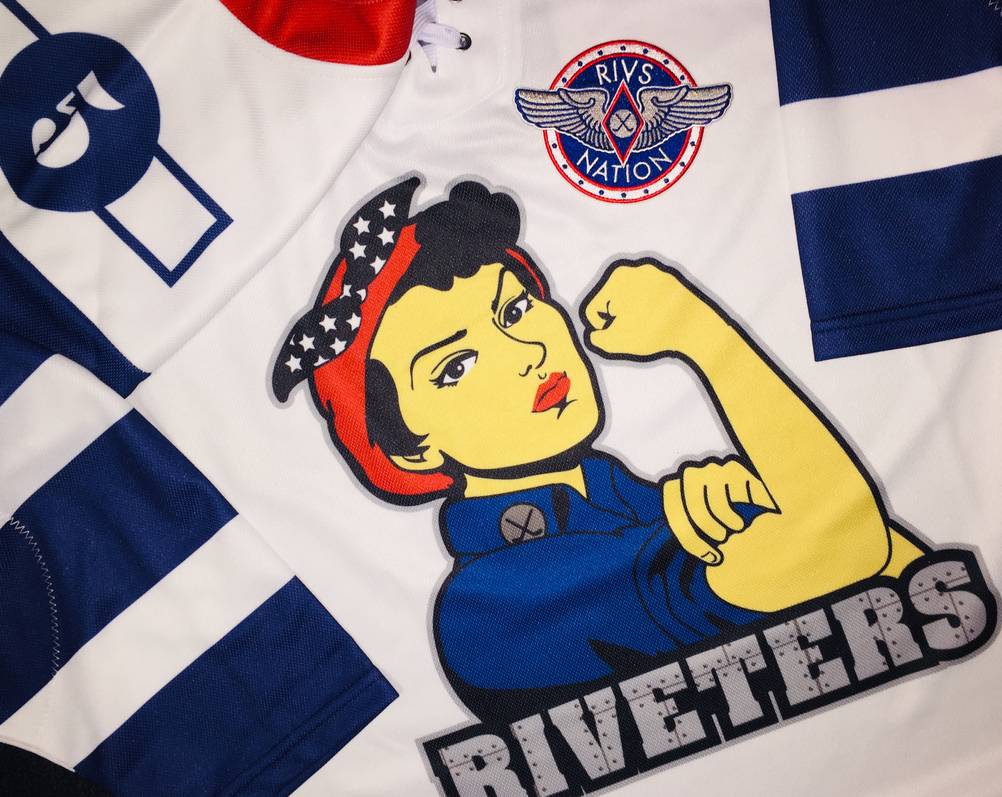 It was a beautiful Saturday afternoon, heading down 95 to Proskate Arena for the Riveters 2019 home opener. Needless to say, I was very excited for Riveters gameday after such a long offseason.

Turning into the arena, there were plenty of signs instructing Riveters fans where to park. Inside ProSkate, the lobby was set up for the Riveters game. MeiGray had their table next to the entrance, the post-game autograph table was set up with name placards for the players, game day posters were being sold, and ticket takers were ready to welcome fans. My first impression of ProSkate is that it's very similar to Chelsea Piers in Stamford, if any other NWHL fans remember the Whale's original home arena. It’s definitely more of a community rink, with a smaller seating capacity, and a very intimate atmosphere. Also, it’s super cold inside the rink. If you make it to a Riveters home game this season (and you should definitely try!), make sure to dress for winter!!

As fans settled into bench seats, the players stepped onto the ice, and we were ready to watch the Riveters take on the Pride in their first game of the season!

~ I can't emphasize this enough: STOP. Stop Taking Obnoxious Penalties! After the preseason game, where the Rivs took a lot of penalties, I was worried they would continue that trend into the regular season. Unfortunately, they did. They need to work on being more disciplined. More time spent shorthanded is less time in the offensive end, and even less time getting scoring chances!

~ Speaking of scoring, the Rivs have got to get more pucks on net. And, to get past the elite goalies and defenders, the Rivs need to be more creative with their shots. Go for the corners and angle shots. The NWHL goalies are GOOD, they're not going to make it easy. I saw a bit too much set up and framing during the 5-on-3 in the third, got to keep peppering the crease with shots. Also, the Rivs need to do better on breakaway chances. Got to get that puck on net with some force and no hesitation! I’ll be very excited to see Kate Leary join the team to help bolster the offense.

~ We’ve gotta be more careful in our defensive end. Make sure to communicate! I know by the end of the game the Rivs were down to four defenders, but there were some mix-ups going on that lead to the Pride scoring, first to tie and then quickly followed by the go-ahead goal. Hopefully the blue line will settle down once Dosdall returns to the ice.

~ Poor service/internet at ProSkate! You'll have to… *gasp* watch the game. It’s a bummer that it will be hard for people to livetweet the games for fans at home. Happily, my sources report the Rivs first Twitch stream was pretty reliable, so fingers crossed that continues!

~ This was literally the first thing I saw, and it had nothing to do with the on-ice play, but the Riveters jerseys look sick! In the preseason game, the placement of the Rosie logo and back numbers were a little wonky. The jerseys they wore for the home opener fixed those problems. They also added a Season 5 patch for the league underneath the Dunkin' logo. I was so sold on the Rivs new jersey, I bought one of the blanks MeiGray was selling in the lobby.

~ I was particularly impressed with the weaving and passing from the Rivs, it was awfully pretty to watch! Frequently a Riveter would lose the puck, and a teammate would be there right away to pick it up. I have a feeling their possession, passing, and awareness of each other is only going to get more dependable as the season goes on.

~ Walther was standing on her head! She was getting bombarded from all sides in this game. At some points she took the initiative, and poke checked the Pride as they were coming into the crease. It will be exciting to see her in net throughout the season. If this game is any indication, she will quickly join the storied ranks of outstanding Riveters goaltenders. Also, keep a look out for her flashy glove snap when she catches a puck out of the air.

~ Murphy had a good game. I kept seeing her backing up plays and anchoring the rushes. Glad to see her making an impression on the ice. I know she played for the Whale last season, and it’s nice that she's getting a chance to show off her stuff with the Riveters.

~ Despite the fact they shouldn't take so many penalties, the penalty kill was really looking good. At one point the Rivs had to kill a two minute 5-on-3. I don't know how they kept the Pride out, but they did. Extremely impressive to watch!

~ Cornine!! I mentioned her in my last Rants and Raves, and this game just reinforced everything I saw. Cornine is definitely a player to watch this season. She is very speedy, and great at getting herself positioned in the offensive end.

~ Packer really stands out as a vet on the ice. She is already showing why she is the leader of the Rivs this season. Congrats on the well-deserved captaincy, Packer!

~ The biggest plus of playing out of a facility like ProSkate are all the youth players stopping in before or after their games. There was a constant stream of boys and girls teams standing at the glass watching the NWHL game. It’s not everyday kids get to see high level hockey in their town rink. You could tell they hadn't been to any NWHL games before, and they were really getting into it.

During the offseason, the Pride were one of the teams predicted to be front-runners for the Isobel Cup this season, so this game gave us a good impression how the Riveters stand as a team. Despite losing, the final score of 4-2 looks a lot worse than the Riveters did in the game. The Season 5 Riveters look pretty darn good, and kept up with the Pride. Of course there's always room for improvement. Most importantly the Rivs really need to work on discipline: stop taking foolish penalties, and work on increasing SOG. I think once Dosdall and Leary join the roster, they will really help stabilize the team.

Next weekend, the Riveters travel to Minnesota to take on the Whitecaps in a Saturday/Sunday back-to-back match up. Leary is slated to join the team on the road trip, and that will do a lot to help strengthen the offense. Next week's games are not ones to miss. Hopefully the Rivs are able to get a win so they're not in a 0-3 pit a mere two weeks into the season, but standings aren't everything. If they play like they did against the Pride, and take care not to take penalties, I think they will have a successful road trip!

Also, I'm just happy to see a team that's working hard on the ice, supported by a dedicated coach, and playing some good hockey.