The Minnesota Whitecaps, the newest addition to the NWHL, finished their second exhibition game on Monday, beating the University of British Columbia 5-0 following a 4-3 win over the University of Minnesota Duluth last Saturday. The two games gave fans a look at what to expect from the team, and it's looking good.

If there is one thing that defines Minnesota's newest pro-sports team, it’s speed. First line. Second line. Defense. It doesn’t matter. The team doesn’t have a need for speed because they already have more than enough to go around.

There certainly were some rough starts on Saturday as the offense built up their chemistry. The Whitecaps missed some passes and got stuck in their own zone. In the process, it gave Duluth enough opportunities near the net that Hughes and Rogge landed three goals against the Whitecaps' starting goalie, the former Beaut, Amanda Leveille.

The defensive pairs, on the other hand, were well coordinated from the start. Each pair had their own strategy and a unique style of play. Some were more offensive, some were more defensive, and some were notably more physical than others. Every one of them though held a good balance between offensive support and the defense their goalies needed.

That said, here is a personal look at some of the state of hockey's newest stars.

My kid’s got a nickname for Hannah Brandt’s reliable right-wing: Fast Katie, and it certainly fits. It didn’t matter where the puck was on the ice, somehow the Brandt pack got a hold of it. McGovern and Curtis rotated between lines as left-wing. The wings did a great job of moving forward, getting a hold of the puck, and sending it into the center to either give Brandt a pass or a chance at a shot off a deflection. Brandt showed her anticipated skill on a few shots, including a jaw-dropping backhand past Maddie Rooney, but Brandt really began to shine through once the line got in synch. I can say, as this line builds up their chemistry, they are certainly going to be testing just how unyielding Fitzgerald’s brick wall is.

Allie Thunstrom, the medal-winning Olympic speed skater, was one of the first signings of the season, and a hotly anticipated addition to the league. In both games the 5' 5" forward created impossible breakaways, drawing talented goalies well out of the crease. She took off, flew past anyone in her way, and stopped sharper than everyone else in the league. On Monday, Thunstrom upped her shooting game a little and, with the help of some slick passes from Brandt and Menke, landed a hat trick against UBC. Suffice to say, with her penchant for pulling off one-on-one charges on the net, Thunstrom is going to be a force to be reckoned with. To her, every pass is a breakaway in disguise. 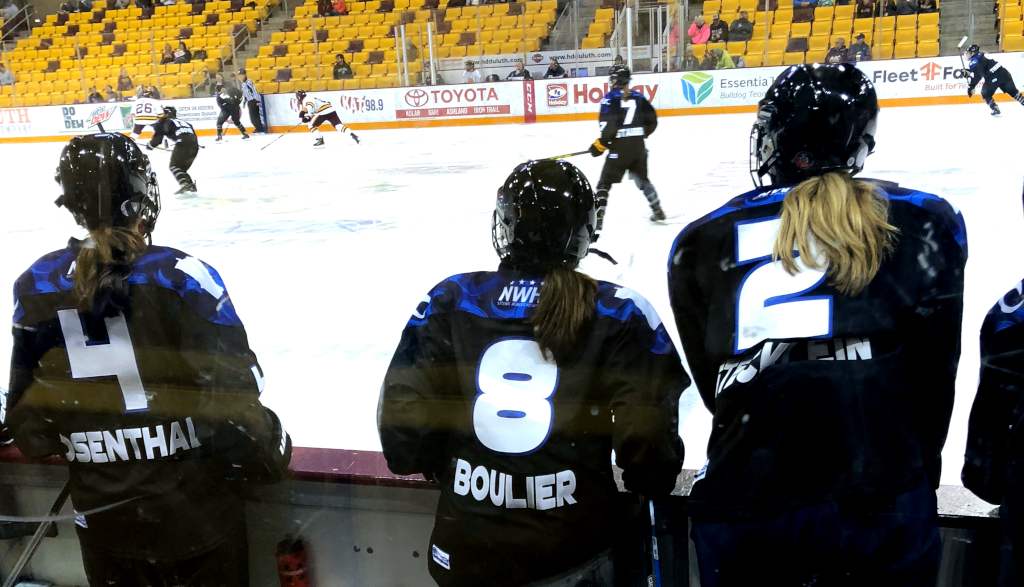 It will only be a matter of time before the 5’ 1" Amanda Boulier and 6’ Lee Stecklein appropriate the label "Minnesota Twins." The two are one of the best defensive pairings of this preseason. They seamlessly moved in and out of the offensive zone and rushed back to the net when they needed. In both games, they were fast, controlled, mobile, perfect forward support, and they had an amazing sense of position. That synchronization regularly helped create opportunities for the talented defenders to take some quality shots on net, pulling in two points each in their first two games.

Julie Friend, Minnesota's friendly neighborhood Spider-girl. On Saturday, league fans got to see what she was made of, and what they saw was some fast reflexes and great reach. Friend had a more upright stance than Leveille, but dropped when she needed, spun when she needed, and learned from Leveille's mistake: she didn’t deflect. The black-padded goalie just grabbed the puck, did not let go, and let the more-than-adept Brandt, Lundquist, and McGovern recover it from the face off. That strategy was a big part of the shot denial that won Minnesota the game on Saturday.

If that weren't enough, she provided the same team support her fellow Minnetonka alum Sydney Rossman is famous for: stick taps, shout-outs, and cheers. With Minnesota’s number 1 Friend (too tempting) behind them, the Caps didn’t even need an audience. After one game, I already know someone who wants Minnesota's #1 jersey for Christmas.

Together with Rossman and Leveille, the Whitecaps are going to have all the skill in net they need to tackle the onslaught of double-headers they face this season.

The unsung hero and shining star of the Whitecaps is coach Ronda Engelhardt (we'll ignore the "co-head coach" formality for now). What everyone saw on both Saturday and Monday was a coach engaged with her team: giving advice, talking with her players, and adjusting her carefully chosen lines when needed. It was clear to anyone watching either game that the player combinations worked well, very well. Each player benefited from the skills of their teammate on the ice in a way that was unique to that player. This is a strategy focused on both team effort and satisfying the needs of each player, it’s something the best professional coaches do. They rely on team chemistry, not talent alone, and whatever they're paying Engelhardt, she deserves a raise.

In summary, the Whitecaps look good, and if the Riveters want to hold on to the cup, they’d better keep an eye on the state of hockey.