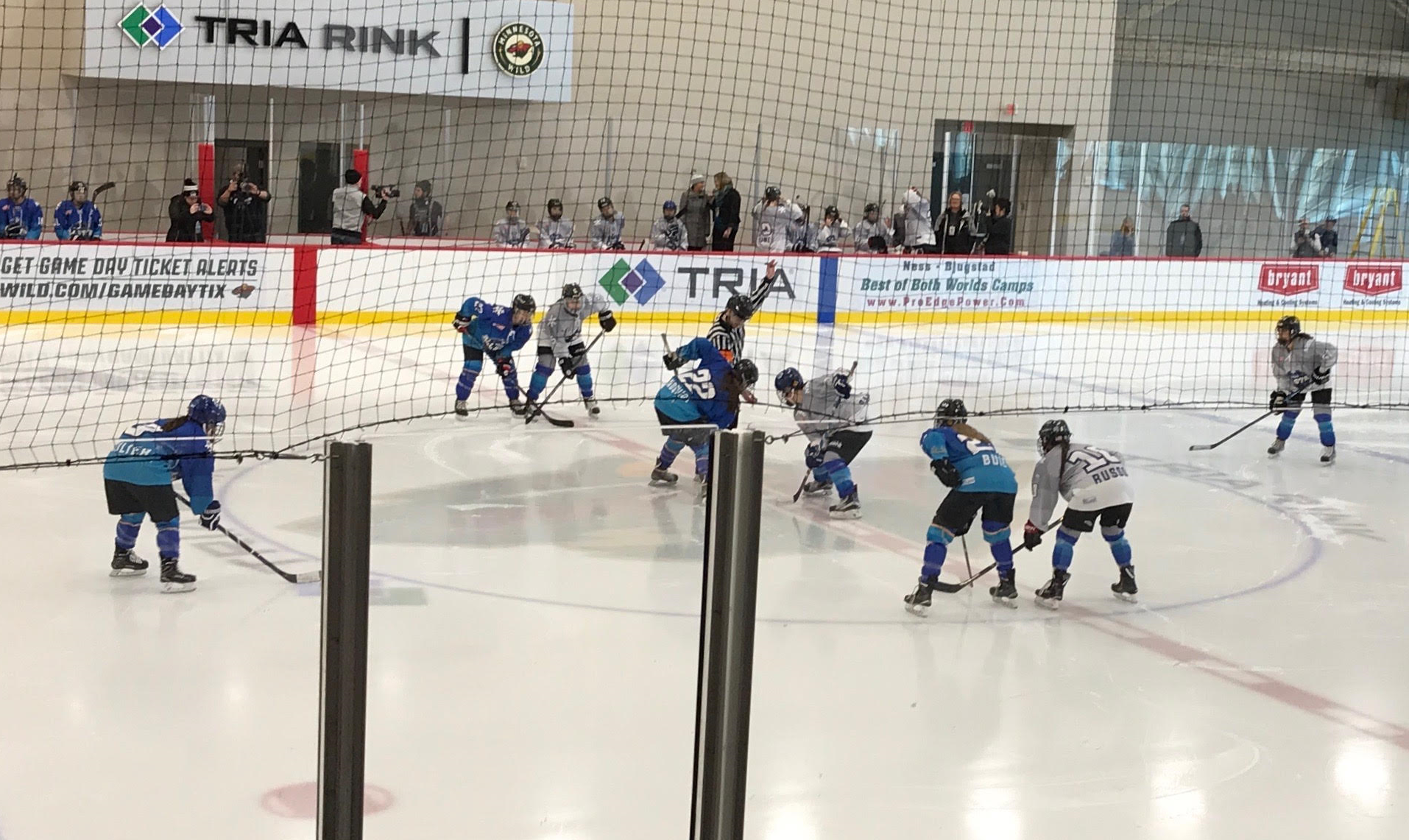 I realized a long time ago that no matter what I do, I can never be a perfect role model for my daughters. I can wear pink, let them paint my nails, play dress up, take them hiking, tell them women are equal to - or better than - men, but no matter what, I will always be different. I can never completely empathize with them. Their perception of what it means to be a woman depends on what they see from the women around them, and I can never control that.

I didn’t know the NWHL existed before last August. I simply needed examples of hockey players for physics lectures at an all women’s college, so I watched it. A lot. I had to track roster updates, new lines, and specific talents. I had to measure Rebecca Russo’s speed. I had to look up the heights and weights of Shannon Doyle and Jordan Smelker. The NWHL became a staple of TV in the evenings and weekends. Soon enough, at 3 years old, my daughter wasn’t watching Fleury and Toews. She was watching Babstock and Leveille.

Now, she is talking about hockey as much as Disney movies. She is obsessed with Anya Battaglino, insists any picture of Sophia Agostinelli is a picture of herself, and refers to Nabiscos and oreos as "Sam cookies" simply because she assumes Faber is always the one "holding the puck." She insists the NHL is not "real hockey." She asks questions about Alexa Gruschow, and whether Katie Fitzgerald and Sarah Edney are friends. Pictures of Rosie the Riveter are pictures of Anya Battaglino: they aren’t pictures of a long-past 1940’s labor icon, but a 2017 labor leader in women’s athletics.

At first, I didn’t quite understand where this bizarre fascination with a game she didn’t really understand came from.

Worse still, she was being told what it means to be a girl, what girls do, and how they behave.

I am lucky she was exposed to the NWHL right before this happened. Now, as she is being told she is a girl, she is watching 100 other people skate around the ice, talk to little girls, interview sportscasters, play tricks on one another, steal pucks, rally crowds, and move at 25 mph. Importantly, those people are all referred to as "she" and "her," and not "he" and "him." The women in the NWHL outnumber every female in her life by 4:1. As she is being told she is a girl, in her mind, those are what girls are like. That is what she is supposed to be like: a multi-talented athlete who is faster, stronger, and smarter than everyone else. At the same time she is hearing about how great princess Sofia is, the only Sophia she sees is 5’10", plays lacrosse, and talks about traveling the world and being a scientist.

Watching the NWHL from such an early age means that as she grows up, she will always have had "unconventional" women she looks up to. They won’t just be random examples of a female scientist, politician, or a doctor here and there. Rather, she will be watching a league of 100 women - each looking different, having different talents, different careers, and different backgrounds. They won't be wearing pink or blue, they will be wearing hockey jerseys. Women won’t be the exception, men will. Her role models won’t be exceptional women that are part of a culture dominated by men. Unlike the rest of us, she won’t assume sports are a boys’ pastime. Rather, as she gets older, she will slowly realize boys play hockey too.

I imagine it will be exactly the same as her little sister grows up.

Because of the existence of the NWHL, I can worry about being her father and let Corinne Buie and Sam Faber be her role models. For that reason, I will always love the NWHL. I will always be in the debt of every woman who makes the league succeed. More fathers should do the same, and entrust these teams with the leadership their daughters need, because, just like hockey, they're good at it.So, to Anya Battaglino, on behalf of your smallest fan, I just want to say: fins up.