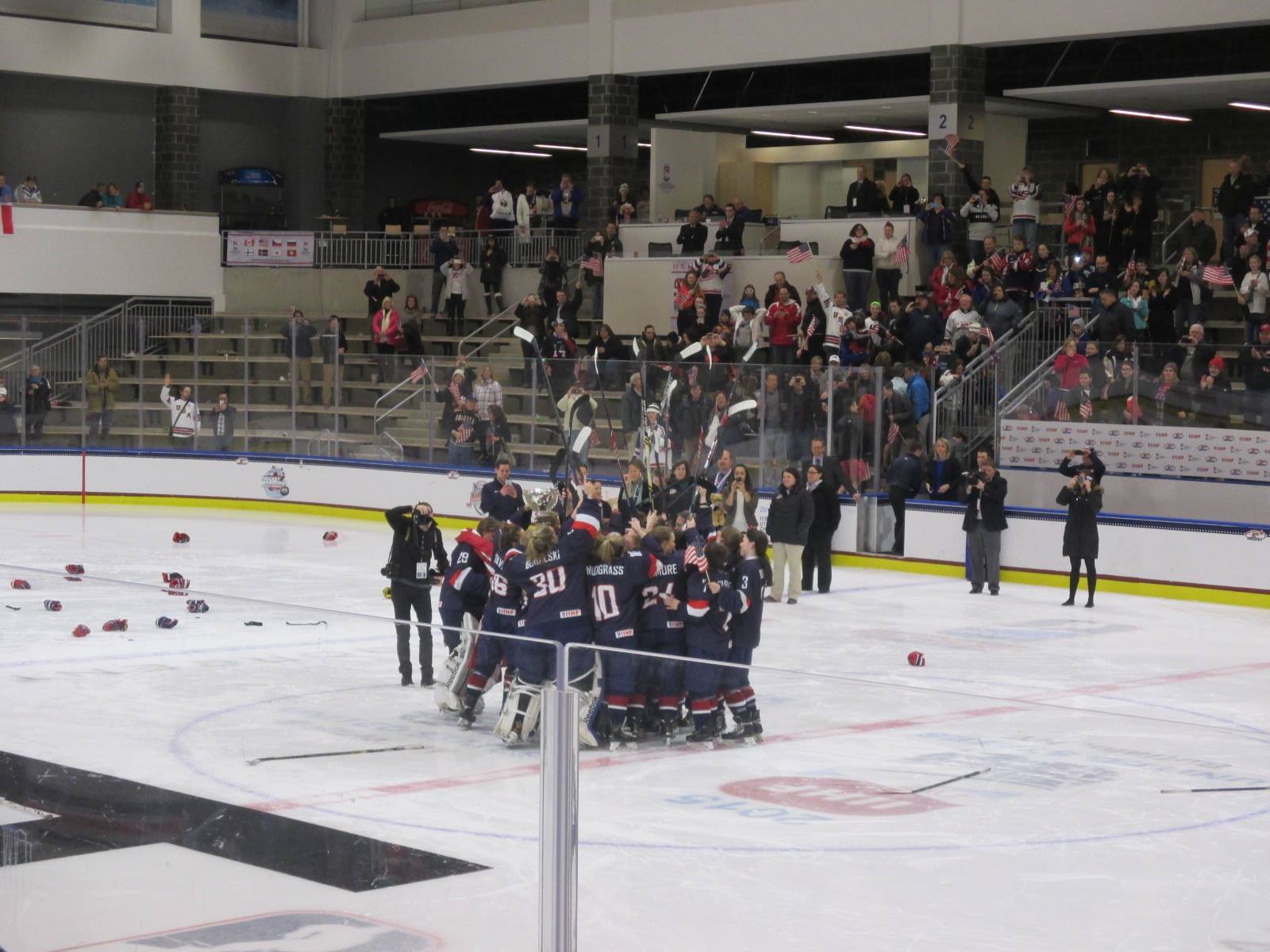 Although I now write about it regularly for The Victory Press, I'm really fairly new to the world of women's hockey.

Before January 2015, I'd never seen a women's hockey game in person. I'd never watched a game on TV, or online. I assume when I was younger I must've at least been aware of the existence of women's hockey in the Olympics, but it was never really a "thing" for me. I'm not sure why.

I've lived in Buffalo, NY my entire life, and it's a hockey hotbed. I started watching the Sabres when I was five or six years old, and followed the NHL and Buffalo's team as a dedicated fan for years. I also forayed into the AHL and junior leagues, including the OHL. But again, for the most part, all the hockey I was exposed to was men's.

Enter: the IIHF. Buffalo hosted the U20 men's world juniors a few years ago, and was subsequently awarded the 2015 U18 Women's Worlds. This, it turned out, would be my introduction into the world of women's hockey.

Initially, I went to the first game to support my then-boyfriend (now-husband) Ryan, who was doing the public address and music for the tournament. (He is now the PA announcer & DJ for the Beauts.) That's it. That's what got me in the door.

But what I saw in that first game - which just happened to be a USA vs. Canada game - was magical. I was amazed by these incredible athletes representing their countries in a thrilling matchup that ended with the US winning 2-1 in a shootout.

I ended up going to every game remaining in that tournament that I could fit in (mostly after work). To say I was hooked would be an understatement. I'd made it 24 years of my life without ever watching women's hockey, but those few games changed everything. Especially that gold medal game: a packed house, USA vs. Canada vying for the prize, and the US winning in overtime. I'm getting chills just writing about it here. It was electric in HARBORCENTER that day.

It also happened at the perfect time, as a few months later, the introduction of the NWHL was announced - and Buffalo was getting its own team. (As it turns out, the success of the U18 Worlds was part of what led Dani Rylan & co. to put a team in Buffalo, so our stories are connected!) I knew right away that I wanted to be a piece of it, somehow, which eventually led me to The Victory Press.

From that first camp, to interviewing the newest professional women's hockey players, to being in the rink the day the league opened its first season - it was an incredible few months, and just furthered my interest in women's hockey. As I covered the first season, then the second, I got more invested. I'd be lying if I said part of that wasn't due to my frustrations with men's hockey (the NHL, mostly) and its handling of issues like the situations with Patrick Kane, Garret Ross, etc. and how this all seemed to reflect on how they just didn't care about women or female fans. But part of it was also just how captivating women's hockey was. How these women were making careers out of what they loved. How they were forging their own paths and creating something out of nothing.

Of course, I also love(d) seeing the little girls who look up to these women. Considering when I was younger I had no idea women's hockey was even a thing, I think it's great that these young girls are being exposed to it from a young age, whether or not they're already playing.

Obviously, with the introduction of the NWHL, I also discovered the existence of the CWHL, too. I can't believe I didn't discover it sooner, but then, I just hadn't been exposed to the right people, I guess. I started following more and more women's hockey people on Twitter - players, coaches, teams, fans, writers - and wrote about the sport on VP. And I absolutely love it.

I haven't missed a Beauts home game in the team's existence; I got to attend the first-ever NWHL All-Star Game in Buffalo and covered that, too. I even went to Newark for the first Isobel Cup Final, where I saw Boston win the championship and then went on-ice to talk to the players for my post-game pieces.

Being a writer from Buffalo and having been on the Beauts beat, it's hard to say that I don't have a vested interest in the team. I won't call myself a fan, because in the end, I am a writer, and I'll cover the team, winning or losing, objectively. Was it frustrating to watch them lose the first Isobel Cup? Absolutely. Was it amazing to see them win it the second time around and bring a professional championship to the city of Buffalo? Totally.

Today, I'm not just an NWHL writer. I've also covered the CWHL - most notably, their All-Star Game this past February up in Toronto, which was ridiculously cool. I've also covered the College Hockey America championships for the past two years, including in an official media capacity this season. I've become a full-fledged women's hockey advocate. What's next? I can't wait to find out.

I think about it now, and those 2015 IIHF U18s were... everything. Without them, I don't know if I would've gotten into women's hockey. Without them and their success, Buffalo might not have gotten an NWHL team. Maybe I still would've caught wind of the league and started following it, or maybe not. Maybe eventually I would've discovered the CWHL, or found an interest in the Olympics and the likes of Hilary Knight, Amanda Kessel and Brianna Decker. Or maybe not.