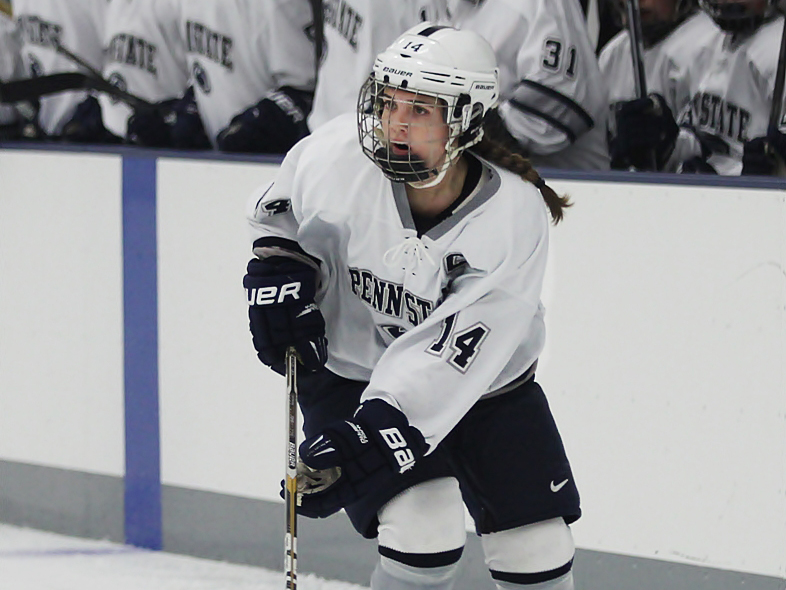 I think most men who are huge women's hockey fans have sort of an "origin story," something that explains how they got there when - let's be honest - women's hockey, at this point in its development, usually isn't That Thing Dad Got You Hooked On As A Kid. A lot of times, the origin story is a daughter. Sometimes, as with the famous example of Mark Johnson, it's a job opportunity. Other times, there's a social equality component to it. My origin story is Carly Szyszko.

Who's Carly Szyszko? I probably need to explain that one.

Back in 2010, when Terry and Kim Pegula made a $102 million donation to Penn State to bring a new hockey arena and NCAA hockey to the school, I started a PSU hockey blog called (appropriately enough) Thank You Terry. I had worked for the men's ACHA club team in college and thought it would be fun and interesting to chronicle their transition to varsity status (it was, for the record).

By early 2011, things began to change. That January, six Penn Staters were given the opportunity to play for the U.S. National University Team that competed at the 2011 World University Games in Erzurum, Turkey. Four players (along with the head coach) were from the women's team, and out of some built in love for international hockey, I decided to blog about both the men's and women's versions of Team USA (the role of the World University Games in this story is largely why I get so obnoxious about the event every two years, for those who know me beyond this post).

However, a story back home fascinated me just as much, maybe even more. Of those four women's players at WUG, two were goalies - Penn State's only goalies. The person first tasked with putting on pads and facing some of the ACHA's best teams while the goalies were abroad? Left wing and team leading scorer Carly Szyszko.

"[Szyszko] is definitely one of our better forwards," [assistant coach Pat] Fung said. "Unfortunately, we just don’t have a lot of other willing volunteers right now [to play goalie] so she’s going to take one for the team."

I thought two things when learning of the story:

Carly did manage to win a game as a goalie, versus an overmatched lower-division squad in California (PA). Against national title contenders Michigan State and Robert Morris (IL), she didn't fare quite as well. Neither did Lindsey Shuler, nor Julie Horn, the others who subsequently gave it a shot. The whole thing turned out to be catastrophic for the Lady Icers as a team, who went on to miss the ACHA national tournament after being ranked in tournament position when WUG started. But, if nothing else, from that point on, I covered women's hockey on even terms with the men.
By late 2012, I had started to consider the blog's end and what was next for me. Even with all of the excitement surrounding the Penn State varsity teams (which began play in 2012-13), TYT had sort of reminded me of the glory days as an ACHA person in college, and without pesky things like a job application, the ability of teams to decline said application, or other people who wanted the position, I decided to fully jump back into that world and volunteer for a team.
There was a bit of a decision to make on that front: Penn State, in addition to the NCAA teams, has both men's and women's ACHA teams. The men's team had a website. The women's team did not. So I made one, using Blogger and my non-existent coding skills. I'm still with that women's team five years later and have become fully immersed in the rest of the women's hockey world along the way.
It would be one thing if Carly's role in my story ended with what wound up being 140 minutes in goal before I even met her. It did not.
Carly, by that 2012-13 season when I started with the team, was a junior captain, and when people start to list the great captains in hockey history, I always make sure to throw her name in there next to Steve Yzerman, Mark Messier and Sidney Crosby. It probably sounds a bit oversimplified, but she had a way of making everyone feel important and a part of the team's success in a way all leaders aspire to but few actually accomplish.
One game weekend early on, she handed me a stack of team-issue clothes (that most people pay for in club hockey) and my often-awkward "am I with the team or just watching it" presence instantly felt legitimized. During her senior year, she gave me the game puck from one of our team's biggest victories, and it made me sincerely believe that arguing with people on Twitter helped win a hockey game (it's completely irrational of course, I knew that then and know it now, but that's the kind of belief she could inspire).
Her last game was a 1-0 loss in the 2014 ACHA national championship game to Iowa State. It remains the last time sports made me cry, because I can't think of anyone who deserved that type of career capstone more, and we certainly played well enough to win on most days. Sports and life are cruel that way sometimes.
There are, of course, others who played a role in my fandom, from 2011 until today. Katie Vaughan, Heather Rossi, Lindsay Reihl and Denise Rohlik deserve mentions as the four World University Games players from PSU and integral to the story. Mo Stroemel was the head coach. Cassie Dunne is the most recent Penn Stater to play at World University Games, where she captained Team USA (a squad, incidentally, coached by women's hockey legend Shelley Looney) to a bronze medal. Paige Harrington played with Carly as a PSU freshman in 2011-12 before transferring to UMass, and has given me an easy point of entry to the NWHL as she went on to become an Isobel Cup champion. I worked with the CWHL for a season, and have gotten around the college world a bit too. Truth be told, there are Carlys (Carlies?) all over the place in women's hockey, far too many to name here. They're in the pros, they're in NCAA Division III, they're in youth programs. They're even at Penn State's hated rival, Rhode Island. It may sound cliched, but the people, above anything else, are what makes it such a wonderful sport.
For me though, it all started with Carly the Original, who today brings the same character to managing sweetgreen locations that she demonstrated as a college hockey player. Thanks, Carly.